Troubled waters – and a challenge

SYNOD – “The October 2015 storm will go down as one of the most prolific rainfall events in the modern history of the United States,” said the Weather Channel about the deluge that pelted South Carolina last October. 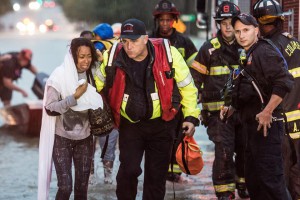 First responders were part of coordinated efforts during and after the flood.

But as waters rose, roads washed out, bridges and dams crumbled, trees fell, power outages occurred, and buildings flooded, history-in-the-making was not what concerned the people of the Palmetto State. Their focus was survival, perhaps disbelief, and ultimately coping with the aftermath.

Congregations across the South Carolina Synod (which covers the entire state), as well as the synod office, sprang into action, often working alongside FEMA, the Red Cross, Lutheran Disaster Response, Lutheran Services of the Carolinas, and other organizations to help pick up the pieces left in the flood’s wake. 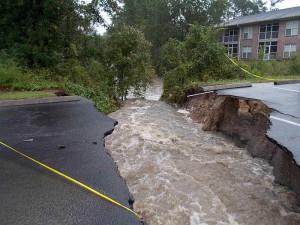 A parking lot becomes a river.

The North/West Lower Michigan Synod (N/WLM) also stepped on board. Knowing that the people of South Carolina would know their short- and long-range needs more than anyone, it was decided that a financial gift would be good stewardship of resources.

This led to N/WLM Bishop Craig Satterlee issuing Bishop Suzanne Dillahunt of the Southern Ohio Synod (SOS) THE CHALLENGE: Which synod could raise the most money for our brothers and sisters in South Carolina?

But there was a catch. 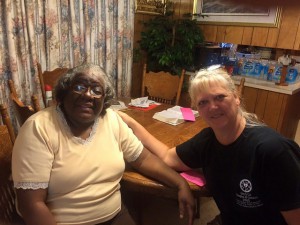 Dillahunt took up the challenge – and probably had confidence that she would not be wearing MSU colors any time soon. The SOS has almost twice as many congregations as N/WLM. 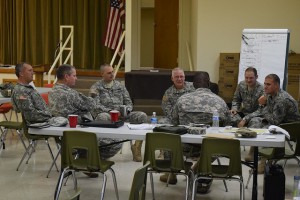 Good Shepherd Lutheran Church, Columbia, became the command and housing center for the local National Guard, and the emergency operations center for the city police, whose building was flooded. The congregation and other volunteers fed over 500 police; soldiers; and persons from local, state, and federal agencies on a daily basis.

As it became clear over the weeks leading up to the football game that the SOS was, indeed, going to surpass N/WLM, Dillahunt took the opportunity to thank her congregations:

“Thank you, congregations and people of faith in this territory for your generous support for our brothers and sisters in South Carolina,” she said. “Well done!”

“I can say with certainty that I will not be wearing a Michigan State jersey in pictures over the next few weeks,” she added in good humor. “When Bishop Satterlee puts on the OSU jersey we will post pictures.”

Her synod did, indeed, win the challenge. 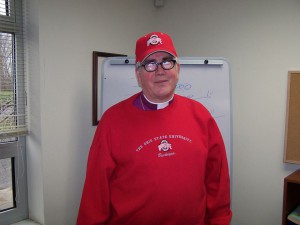 “The flood was unbelievable,” Beaver said. “We thought things were bad here in Columbia, but many parts of the state are much worse off. 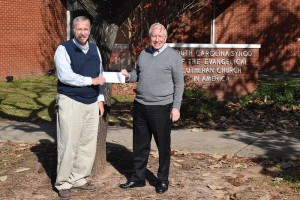 “We’ve (synod) gotten a lot of support and we’ve met a lot of great people. This gift from the people of Southern Ohio and North/West Lower Michigan comes from a loving heart and compassion.”

Beaver indicated that the monetary gifts will be helpful when it comes to long-term assistance and recovery.

“There will be down-the-road or unforeseen effects that will come up,” he said. “It’s good to know we’ll have resources to help meet those needs.”

In the end, it comes down to the people of Christ once again reaching across their geographical boundaries to those in need – expecting nothing in return.

“’The Challenge’ may be an annual event… and that’s an okay thing,” Dillahunt said. “Sometimes we are reminded in fun and challenging ways that we are stronger and better together for the sake of living out the Gospel. I had no doubt we could do this.”

“We lost the bet,” Sprang said, “but the winners were the South Carolina Synod.”

Thank you to the South Carolina Synod, Neil Fischer, and WSAV-TV for the use of photos.

The congregation that could

MT. PLEASANT – Empowered by the Holy Spirit, shepherded by their pastor, and determined to “be Christ” in the community, Immanuel Lutheran congregation, Mt. Pleasant has become a key player in bringing shelter to the homeless of Mt. Pleasant and surrounding area. 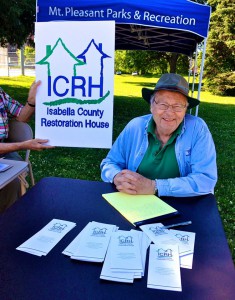 Getting the word out.

Although past attempts have been made to establish homeless shelters in the town, success has –for a variety of reasons – been thwarted. Pastor Dana Hendershot (Immanuel) and other key community leaders came together in March 2013 to find a long-lasting solution to an immediate need. The result: the Isabella County Restoration House (ICRH).

As in most undertakings of this magnitude, funding is a major piece. Hendershot took a risk… and the people responded. In Nov. 2013, she put forth a stewardship challenge based on the parable of the ten pounds (Luke 19:11ff). She gave $10 to each member interested in multiplying that amount as a donation to the ICRH project. 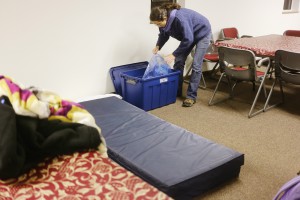 Ways of raising money were as varied as the folks who participated.

The Geisthardts: Abby celebrated her 17th birthday by asking her friends to donate to ICRH in lieu of presents. Cheryl and Paul invited their kickball league teammates to participate in a fundraiser, “Kickers with a Cause.” Haylee sold nature photos.

Chuck Clise’s donation came through the payoff (sale of honey) of investing his $10 in his beekeeping business. Rose Prasad and her sister, Margaret, made and sold vintage beads jewelry. Ed and Bonnie Berthold took apples from their orchard to a cider mill and donated the payment they received to ICRH.

Jocelyn Strandskov made and sold bookmarks. Gail Mitchell matched any money she spent on junk food. Katrine and Mike Piatek-Jimenz made and sold blocks of peanut butter fudge. 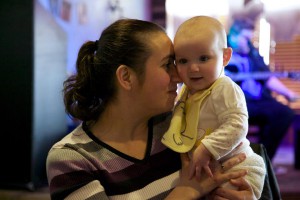 “Raise the House” was enjoyed by caring folks of all ages.

“Raise the House”, the brainchild of a group of 12 members (including Hendershot), was a community event held at Hunters Ale House that included music, raffle, food, homelessness-awareness, and lots of good fellowship.

These are just some of the creative fundraising done by the people of Immanuel.

Assisting with ICRH is Central Michigan University intern Amy Henderson. She will be featured in a future article. You can find out more about ICRH at icrhouse.org or on Facebook.