EAST LANSING – The first installment of this article focused on the God’s Work, Our Hands (GWOH) collaboration between University Lutheran Church (ULC) and the Islam Society of Greater Lansing, who sit on adjoining properties in East Lansing. It included insights about GWOH and the congregations’ relationship from Imam Sohail Chaudhry, who came to the Islam Center in Dec. 2014. Now we’ll hear from ULC’s lead pastor, Fred Fritz.

The relationship between ULC and the Islam Society goes back about 30 years. It began with the Islam Society reaching out to University when its building was in need of expansion. When the request came before the East Lansing Planning Commission, ULC members and Pastor George Madsen attended to give their full support for the project. 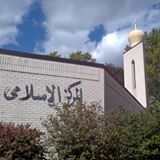 The ISGL shares interfaith discussions with ULC and local synagogues.

This seemed to be a natural move on both congregations’ parts. ULC was already allowing its Muslim neighbors to use its parking lot when they gathered for Friday prayers.

Pastor Fred Fritz came to ULC in 2003 and, since then, the relationship between the two bodies has become more intentional.

“When I came to Lansing I was immediately greeted by then Imam Omar Sobani,” Fritz said. “When the imam became ill a few years ago, our [Church] Council presented him with a prayer quilt and prayed for him.”

In 2007, the congregations came together to landscape the property between the mosque parking lot and the church’s north driveway.

“A member of ULC drew up the plans and members of both communities did the work,” Fritz said. “The landscaping includes two brick paver sidewalks to connect the communities.” 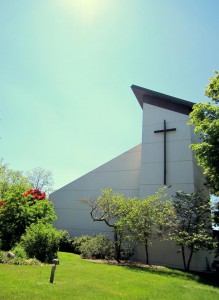 ULC shares its parking lot and playground with the mosque.

The addition of the sidewalks provided an added bonus.

“Around [the time the walks were laid], the children from the [Islamic] Center’s school began using our yard and play area for recess,” Fritz said.

The year 2009 brought a new depth to the relationship when ULC, the Center, and the local synagogues began biannual interfaith discussions.

“Topics have included basic teachings of each tradition,” Fritz said, “as well as the role of women and the separation of church and state. Our next event will address earth keeping.”

The relationship between the two faith communities is certainly needed in today’s world and is one that has not gone unnoticed. 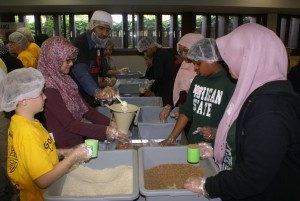 “In our time God seems to be bringing people of faith–Christian, Jewish, Muslim–together to work for justice and peace in the world God loves and to serve God’s most vulnerable children,” said Bishop Craig A. Satterlee of the North/West Lower Michigan Synod.

“It is both exciting and gratifying to see God at work in this way in East Lansing, on the territory of our synod.”