EAST LANSING – At a time in when intolerance seems to be the norm, it’s refreshing to come across an example that dispels that notion. In this case, it comes in the form of a long-standing relationship between University Lutheran Church and the Islamic Society of Greater Lansing, both in East Lansing. 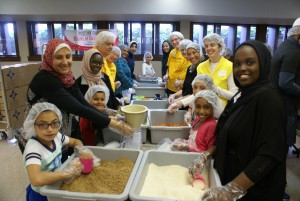 Members of both faith communities look forward to a bright future.

The congregations, which have had a relationship for about 30 years, provide spiritual and religious guidance and services to Michigan State University and surrounding area, sit next to each other, share parking lots and a playground, and hold an annual interfaith event.

This year, the long-time friends took their relationship a step further when University asked the Islamic Center to join them for God’s Work, Our Hands Sunday on Oct. 13. The mosque’s spiritual leader, Imam Sohail Chaudhry, wasn’t surprised by the invitation, nor by his congregants’ eagerness to participate. 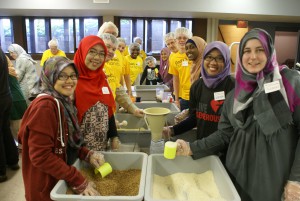 SONY DSCYouth from both congregations were among the volunteers.

“When I came here, I was over the moon when I heard of the warm, close relationship with the Lutheran Church,” said Chaudhry, who came to the area in December 2014.

“It is one of my goals to improve relationships with other faith communities and bring people of different faiths closer through education and collaborative efforts. In the case of the Lutheran Church, I didn’t have to make much effort because this relationship had been established before I arrived.

“Since we share the same goals of eradicating hunger and reaching out to those in need we immediately accepted the invitation and thought that this was a great way of serving humanity together and bringing the people of the two faiths closer.”

Working side-by-side at University, the volunteers filled 10,000 packets of dehydrated food sent to local and national food banks as part of the Kids Against Hunger campaign (www.kidsagainsthunger.org). 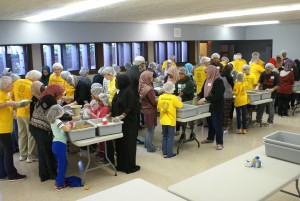 The group put together 10,000 dehydrated food packets for hungry children.

Chaudhry said it was a great learning experience for both faiths.

“I think the most important gain from this project was the realization that we can all work together despite our differences and that these differences cannot and should not bar us from collectively doing what we all believe in,” he said. “Building bridges through projects of common interest is the way forward for a pluralistic America.”

The imam also believes that Islam and Christianity have a shared mission.

“Islam means total submission to the Will of the Creator by reaching at peace with Him,” he said. “This peace cannot be achieved without serving the creation. ‘Be merciful to those who are on the Earth and the One who is in the heavens will be merciful to you’ is the message of Prophet Muhammad (peace be upon him).

“Islam promotes peace through standing up for justice and spreading awareness and understanding. According to Islam we the humans have been appointed over the Earth as caretakers and will be asked by God how we did on Earth. This partnership is a commitment to serve the creation of God and earn His mercy by reaching out to those in need.” 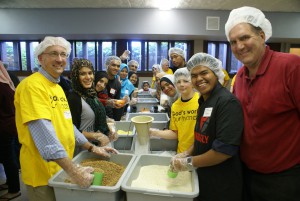 – “Building bridges… is the way forward for a pluralistic America.” – Imam Sohail Chaudhry

As the globe grows smaller and our nation grows in diversity, relationships such as the one between University and the Islamic Center can serve as healthy examples of finding common ground where we can work together for the common good of our communities and our world.

“I believe that the future [for University and the Islamic Center] is bright,” Chaudhry said. “Leadership on both sides is highly committed to continue sharing and educating. The Islamic Center is so thankful to God for having such kind-hearted neighbors and would like to transfer this love and affection for each other through to the next generation.

“I feel that this relationship needs to be highlighted locally and nationally,” he added, “to serve as a model relationship for people of different faiths around the country.”

Thank you to Larry Wagenknecht of University Lutheran Church, East Lansing, for the photos.