A call for community engagement

From the writer: Generally, reporters don’t write in first person, so writing this article was a real challenge. I once served as associate in ministry for education at the featured congregation and was on board for its first day camp in 1998. When Pastor Connie Sassanella invited me to one of this year’s day camp talent shows, I jumped at the chance. It was an amazing, emotional time for me as I moved to various points in the sanctuary and witnessed this profound transformation taking place at St. John, Saginaw – and all I could say was: “Yes!”

SAGINAW – The music of 120 youth, grades 1-8, moved through the sanctuary, voices raised in confidence and praise. “The Spirit of the Lord is upon my heart,” they sang. With passion they sang about freedom.

It was the neighborhood day camp at St. John Lutheran Church in Saginaw.

In its 18th year, the camp began as a two-week program targeted at the neighborhood, drawing in a few dozen kids. Now it is eight weeks, with loads of kids and a wonderfully gifted staff.

An eastside congregation founded by German immigrants in 1852 and once one of the largest in the city, St. John found itself in the same situation as many urban congregations – experiencing “white flight” as the neighborhood’s demographics changed. It became largely a commuters’ congregation while its surroundings changed from predominately European American to African American. 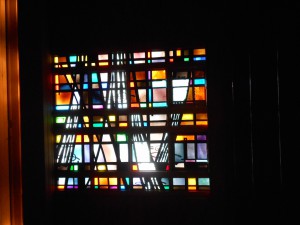 This many-colored window is behind the choir loft where the kids were seated. It reminded me that when the Spirit shines through God’s people of all colors, transformation happens.

Saginaw was also struggling with the profound shift in Michigan’s automobile industry, the foundation of the city’s economy. The city’s infrastructure floundered; the population dwindled drastically.

Beginning in the late 1990s, new pastoral leadership (Frank Reisinger, then Paulette Cummings) slowly helped lay groundwork for the future. Still, the congregation struggled into the 21st century knowing something had to happen – either close the doors or take the risks needed to re-invent itself.

Last fall, another leadership change came along as Pastor Connie Sassanella was installed at St. John. Along with a global vision and a commitment to inner city ministry, she also brought ideas for honing the day camp program with her – including staffing.

“Some of our staff were from the neighborhood; some are old-timers,” she said. “Our arts and crafts director was at the first day camp [in 1998] and our music director, Curtis, is a young man who’s the music director at two churches.” 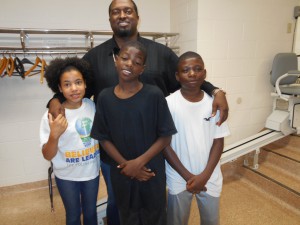 Pastor Kareem Bowen with three day campers from The Potter’s Touch. C.J., right, liked arts and crafts the best: “I like the art part… I like to create.”

Also among this year’s staff were Saginaw Valley State University students who attend the school through a program for inner city students.

“We have the university right here as a great resource… so why not use it?” said Sassanella. “They [students] have been a real gift.”

This year, campers could attend one or both of the four-week sessions that were offered Mon. through Fri. from 8:30 a.m. – 3 p.m. and included breakfast and lunch.

Although the program included what most would consider “normal” camp activities, such as Bible study, recreation, arts and crafts, and music, it stretched to encompass other needs of children who are often at-risk. 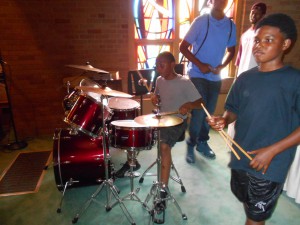 Three young men kept things moving along on the drums.

Among the daily activities were math and reading classes to help give kids the edge at school.

Thanks to a grant, the day camp was able to get an “Experience Saginaw Passport”, which allowed one free trip for a group of 25 to each of three Saginaw facilities: Mid-Michigan Children’s Museum, the Children’s Zoo, and the YMCA.

Music and culture made a wonderful blend when, thanks to an anonymous donor, respected percussionist Kevin Collins paid several visits to the day camp. Collins, who, among many things, directs Flint’s African Drum and Dance Troupe, demonstrated an impressive collection of traditional African percussion instruments, including hands-on time for the kids.

At the end of both sessions the campers presented a talent show in the sanctuary. They sang or danced to music accompanied by a grand piano and drum set or by digital tunes. They performed as one large group and in smaller groups and they did it with passion and with pride. 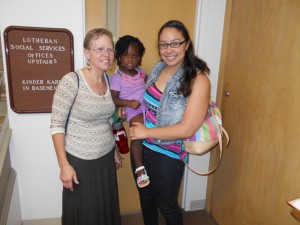 Ruth Sharper, left, attends one of the talent shows with her granddaughter and daughter.

Pastor Kareem Bowen of The Potter’s Touch Ministries in Saginaw had five families from his church involved with the day camp.

“Absolutely,” he said when asked if he saw the program as a positive one. “It’s very safe and a place for the kids to be able to have fun. This is our third or fourth year here.”

Bowen is confident that the arrival of Sassanella, combined with St. John’s day camp and the congregation’s new paths, can only bode well for the eastside community.

“Pastor Connie has brought new energy,” he said, “and this camp has the ability to be a call for more community engagement.”

Long-time St. John member George Pike attended the July 9 talent show and was encouraged by what he saw – some white faces among the mostly African-American audience. 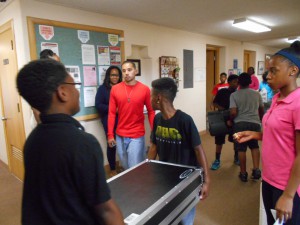 Everyone took a hand in making sure the talent shows ran smoothly.

“I think this is the first time anyone else from the congregation has come,” he said. “I’m glad to see it.”

He paused, then added: