NEW ERA – The pastor and members of Trinity Lutheran Church, New Era, didn’t allow the demise of their Vacation Bible School program keep them from reaching out to the area’s children.

Until last year, Trinity had worked alongside to congregations in nearby Shelby (about seven miles) to bring VBS to the community. But when there was change in both of those congregation’s pastoral leadership, the relationship ended.

“They didn’t want to do it anymore,” said Trinity’s pastor, Sarah Samuelson. “So, we were left with nothing.”

Samuelson, however, wasn’t content with ‘nothing’. She contacted CJ Clark, executive director of Living Water Ministries (www.elcalivingwater.com), a joint venture of the North/West Lower and Southeast Michigan Synods. Clark is a member at Trinity

“CJ told me about Living Water’s day camps, what they were about – and they intrigued me,” said Samuelson. “When he told me they still had one week available, I jumped at the chance.” 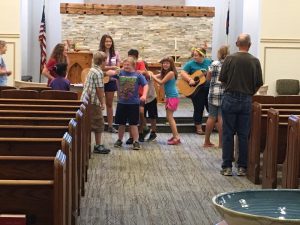 Part of Samuelson’s goal was to try to reach out to the kids whose families use Trinity’s food pantry.

“I hoped that [day camp] would be a good outreach to share the love of Jesus with them,” she said.

Last year, Samuelson served as the congregation’s liaison to Living Water, who provided four counselors to run the week-long program. Her main task was to recruit support personnel.

“We had over 30 volunteers who agreed to shepherd the kids and work in the kitchen to provide meals,” said Samuelson. “It was truly a group/congregational effort.”

To help pay for the event, Trinity received an $1800 grant from the synod’s Outreach Committee. The grant covered 75% of each child’s registration fee. Food was covered through donations from members and a Thrivent action grant. The curriculum was provided by Living Water.

As stated earlier, the day camp is an intentional outreach to the community children (ages 5-12) and those who use the food pantry. Last year, five Food Pantry kids attended the camp.

“We also tried to reach out to the Migrant Headstart,” said Samuelson. “They let us make a presentation to their parents’ evening meeting.”

Unfortunately, there were no Spanish-speaking Living Water counselors available the week of Trinity’s event. But the congregation hopes to have better luck this year.

“We are going to try to encourage [migrant children involvement] again this year,” Samuelson said. “I’ve specifically asked for Spanish-speaking counselors so we can publicize that this year.” 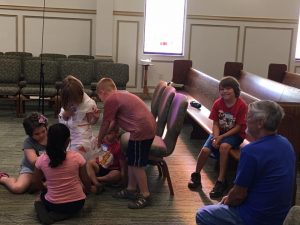 Adult volunteers concentrated on having fun and getting to know the kids.

Including the children of migrant workers and food pantry families is a challenge, but the congregation isn’t kowtowing to any stumbling blocks in the way of its mission.

“It is challenging to get the food pantry kids to participate in programs beyond the pantry,” said Samuelson.

Kids and their families will come to Trinity’s annual Backpack Bash, where backpacks and school supplies are given away during a ‘carnival-type’ event. An annual Trunk or Treat event is also well-attended. It’s programs such as day camp, parenting classes, etc, that are more challenging.

A spin-off from last year’s day camp is “Pantry Perk.” Food pantry volunteers offer coffee, hot chocolate (winter), juice (summer), and treats whenever the pantry is open. Samuelson sees Pantry Perk as one more step in connecting with the community.

“We’re hoping that by building relationships, our food pantry folks will feel more welcome to participate in the life of the church,” she said.

Looking back at last year’s day camp experience, Samuelson and those who participated in the program were pleased with the event and its outcome. 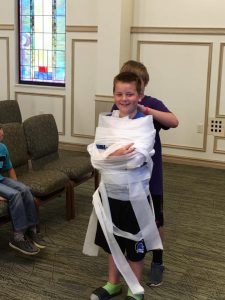 Trinity’s goal is to wrap the community in Christ’s love.

“What we loved about day camp was that it really was like being at camp,” said Samuelson. “There was none of the ‘slickness’ of today’s VBS programs with Powerpoints and sets and stuff. Day camp focuses on relationships that are built through Bible studies, songs, skits, crafts, and games. It’s a very ‘natural’ program that builds relationships organically.

“I think the relationships built between the adults and the kids was fantastic,” she continued. “The adults, not having to teach, really got to participate with the children and build relationships. The kids really loved it and in our wrap-up survey, they unanimously asserted that they much preferred this to VBS.”

There were daily evaluations with the staff and volunteers, followed by an end-of-event survey.

“The staff was very good at listening to us,” said Samuelson, “and the surveys revealed a very positive response.” 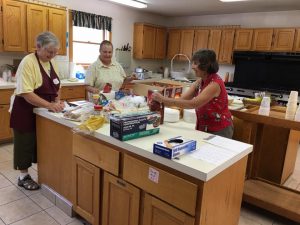 The kitchen crew prepared meals for the busy day campers.

Looking forward to this year’s day camp, Trinity will maintain its focus on reaching out to the community.

“Our church’s ‘motto’ is that ‘Trinity Lutheran Church is The Loving Church,’” said Samuelson. “In contrast to many churches around us, we want to proclaim that Jesus Christs accepts all people.”

**This year, the congregation received a $1200 grant from the Outreach Committee – half the cost of registration.