A Gift of Pie

SOUTH HAVEN – According to The Merriam-Webster Dictionary, one definition of “gift” is “the act, right, or power of giving”.

It’s no surprise the “giving” is defined as an act. It may be a bit surprising that it’s referred to as a right. 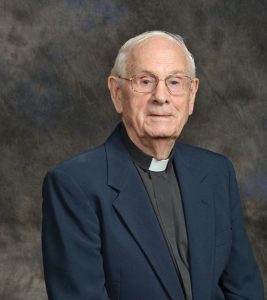 And it’s probably safe to venture that many of us are wondering about the inclusion of power. But should we?

After all, it is through the giving of God’s son on the cross that God exerts power over the darkness of sin. Jesus gives us new life through his powerful and power-filled resurrection.

We find power in our own giving. Through our giving of time, possessions, prayer, and compassion, we see time and time again that our giving gives us power, through Christ, to bring the power of hope, promise, self-sustainability, healing, justice, grace, self-esteem, and new life to others.

Pastor Ray Bartels is well aware of the power of giving.

Ordained 70 years ago as a Lutheran pastor, Bartels may be retired from his “paid” work, but his call to serve others remains intact. Widowed and in his 90’s, one of his lifelong learnings is that what may seem a small gift to the giver can be a powerful example of God’s love and grace to the receiver.

One of Bartels’s more recent hobbies is baking pies. One day he decided that was what he wanted to do – and so he did, and now he does. He now makes 27 kinds of pie.

The first ones were strawberry. Fresh from the oven, he put them in his car and headed for the nearby homes of three men who, like him, were widowers. 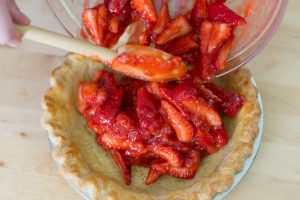 We find power in our own giving.

The first widower had lost his wife six months before Bartels’s wife died. The recipient was grateful for the gift and Bartels’s brief, but meaningful, words.

Finding no one home at the second stop, Bartels moved on to the third one. At first, no one answered the door. Certain that someone was home, Bartels persisted.

Finally, the man came to the door, weary, grief etched on his face and in his stance. Bartels gave a warm hello, a few words, and offered the strawberry pie.

“Ten minutes after I got home, I received a phone call,” Bartels said. “It was the man from my third stop.”

There was a sense of relief and gratitude in the man’s voice.

Then the impact of the gift of a strawberry pie came in the man’s next words:

Pastor Ray Bartels is a member of Peace Lutheran Church, South Haven, and was ordained in 1946. He is still making pies.

Thank you to Peace, South Haven, for the use of Pastor Bartels’s photo. The pie photo is public domain.