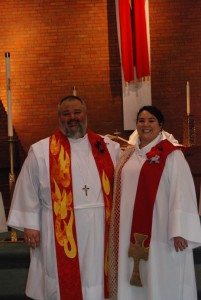 After a path that led him across the U.S. and across the ocean, Pastor Justin Walker, pictured with his wife, Pastor Jessica Rivera-Walker, can only say: “It is great to be back in Michigan!”

HOLLAND – Pastor Justin Walker is in his third year, and first call, at Peace Lutheran Church, Holland – but not before his journey took him across the U.S. and the Atlantic Ocean.

It was during his catechetical studies at Trinity that Walker first felt the call to ordained ministry. Discernment included outside affirmation by those he calls his “faithful mentors”.

Walker visited all eight of the ELCA’s colleges before choosing to attend Augsburg College in Minneapolis. He felt drawn by the area’s urban appeal.

“I really liked the idea of living in a 12-story freshman dormitory,” he said, “and walking in a community setting where English was not the predominate language.”

Walker graduated from Augsburg with a Bachelors of Science in a dual major of Computer Science and Philosophy. He credits his choice of study to the late Pastor Bernie Philabaum (Trinity, Midland).

“He encouraged me not to major in religion,” said Walker, “as I’d be studying it the rest of my life.”

Next came Masters of Divinity studies at Gettysburg Theological Seminary, where Walker would broaden his passion for ordained ministry. Three experiences were instrumental in stirring and affirming that passion.

Firstly, Walker was able to assist a congregation in the small Pennsylvania community of Stoverstown.

Secondly, he did his internship at Phinney Ridge Lutheran Church, Seattle Washington – an experience he describes as being “a pleasure”.

“This is a community for whom Christianity and worship is not the norm.” said Walker. “This congregation adopted the ancient practice of faith formation known as the ‘Adult Catechumenate’ and applied it to its ministry setting. It was a life-changing experience.”

Lastly, during his last two years of seminary, Walker preached three times a month at the Appalachian town of Petersville.

Walker’s studies were not done, though, upon graduation. He accepted scholarships to study German at the Goethe Institute in Dresden, and to the University of Oxford where he earned a second master’s degree in science and religion.

By now, Walker was anxious to get back to the United States and immerse himself in parish ministry. He has found Peace, Holland to be a great experience.

Like his journey to Peace, Holland, Walker’s path to the marriage altar with Pastor Jessica Rivera-Walker was a journey in itself.

The Walkers were college friends who reconnected when, about eight years after first meeting, they wound up at the wedding of a mutual friend. He was living in Europe; she in the Minneapolis-St. Paul area. Long-distance dating paid off.

“We were living on opposite sides of the ocean, 4,000 miles and six time zones apart,” said Walker. “But God knew we were meant to be together and we soon realized the same.”

Walker sees three predominate aspects to what he believes are the leading challenges and offerings of today’s church: authenticity, relevance, and story:

“The Gospel of Jesus Christ is singular… our mission to proclaim and minister in Christ’s name authentically is what the world needs. I feel many of the questions the church faces – and will soon face in greater numbers – is “how the church is relevant, both personally and corporately.

“The days when one is born into the church and raised in a community of faith are waning. Amidst numerous and positive pulls for our energies, time, talents, and resources, the church needs to keep proclaiming its place in lives and society. A key response is to tell our story.

“In Oxford, I was not only an outsider as a non-Anglican, but also an oddity as a Christian. The term ‘Lutheran’ often required an explanation. The practice of telling our story draws us into Scripture and our Christian inheritance, treasures which are a pleasure to share.”