WYOMING, MI/SUDAN – Our synod’s Sudanese congregation is being featured in this three-part article. In part one, I spoke of my experience meeting and worshiping with the congregation and how their steady, abiding faith struck a chord deep within me – for their roots come from a long, horrific civil war that produced a phenomenon called “Lost Boys of Sudan”. Here we’ll take a look at this phenomenon that is so much a part of the lives of our Sudanese brothers and sisters at Christ Lutheran Church, Wyoming. Thank you to rescue.org for use of their photos.

From 1983-2005, the Second Sudanese Civil War claimed about 2.5 million lives and displaced millions more. The Lost Boys of Sudan was a name used colloquially by refugee camp workers to name the thousands of boys, mostly of the Nuer and Dinka ethnic groups, who were displaced and/or orphaned during the war. It resurfaced in 2011-13 as children fled a wave of post-war violence between Sudan and South Sudan. 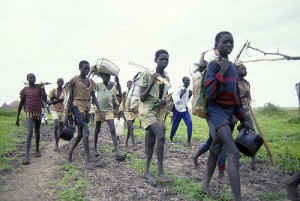 Most of the men from our synod’s Sudanese congregation were part of the “Lost Boys of Sudan” who fled a tragic civil war.

The majority of Lost Boys were orphaned when they were separated from their families by government troops and rebels that systematically attacked villages and massacred thousands. Many boys were tending cattle away from their villages and were able to flee into the bush. 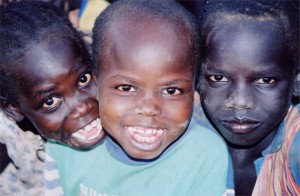 Boys as young as seven – or younger – dared to make a 1,000 mile journey on foot to find refuge.

About 20,000 boys – the majority being 6-17 years old – traveled on foot seeking refuge in Ethiopia. Many were robbed of shoes, blankets, and other survival needs by soldiers and bandits. More than half died from starvation, dehydration or exhaustion; disease or illness; attacks by enemy soldiers, or wild animals, such as lions; drowning; exposure; or the crossfire of fighting forces. Others just seemed to vanish.

Once settled in the refugee camps of Ethiopia, the boys eventually began to live relatively peaceful lives – until a 1991 change in the government forced them to leave the country. Most returned to Sudan and were able to settle into refugee camps.

But that was short-lived. There was a re-surge of violence and the boys began another perilous journey – this time to the Kakuma refugee camp in Kenya.

Some boys spent up to a decade or more in flight and in refugee camps. 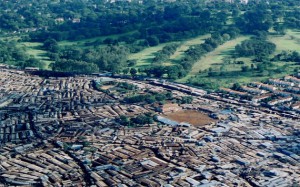 Girls also faced dire consequences of the war. They were routinely raped by soldiers and, along with women and small boys, were taken north and pressed into slavery.

According to Sudanese law, girls cannot be “left alone” (sans an adult), so girls who fled could not stay at the refugee camps. They were turned over to surviving family or adopted by other families. Consequently, they did not receive refugee status and were not included in resettlement programs. Others were able to escape to refugee camps along with their families.

In the final part of this series we’ll meet Paul Atem, one of the Lost Boys who came to the U.S. in 2001, at the age of 17. Atem is a lay leader of our Sudanese congregation whose childhood experience of on-going civil war, violence, and displacement shapes who he is today – a man whose deep abiding faith undergirds the hope he has for his family, his congregation, and the Republic of South Sudan.