WYOMING, MI – The “Abounding faith” series focuses on our synod’s Sudanese congregation at Christ, Wyoming. Part 1 shared my experience of worshiping with the congregation. Part 2 gave background on the “Lost Boys of Sudan.” In this final installment, we meet one of the congregation’s lay leaders, Paul Mawut, a Lost Boy whose faith sustained him then – and now.

Paul Deng Mawut [maw-oot] moves in a languid, self-assured way – back straight, arms moving like subtle waves on the sea, graceful, seemingly at ease – a walk often attributed to those native to Africa. 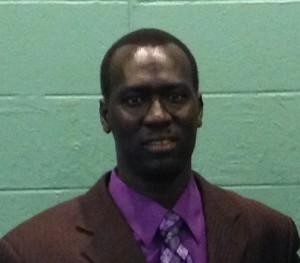 Paul Mawut’s faith has sustained him throughout his life – and he looks forward to returning to Sudan to return the blessings he has received.

Mawut, 30, was born in 1985 in the community of Adhiok, Twic County, in the state of Jonglei in South Sudan. Most of the area’s population are of the Dinka or Nuer tribe. Mawut is Dinka, which is also his native language.

The Dinka, along with the Tutsi, are the tallest people in Africa, with a man’s average height pushing six feet. (Born in South Sudan, NBA player Luol Deng is Dinka and stands 6’9”.) It is notable that today’s men who were Lost Boys are measuring an average of just over 5’9”, attributed to the extremes they suffered.*

Mawut was part of the 20,000 Lost Boys, mostly ages 6-17, who fled the violence.** He remembers being a young boy trying to evade capture – or worse – by rebel or government soldiers.

“The soldiers would come to the villages when the boys were away tending the cows, so that is why we were able to get away,” Muwat said. “The rebels would capture boys as young as 12 – then it became younger and younger, even age 7 – to serve as soldiers.

“The government promised to take care of and educate boys whose parents sent them to special ‘schools.’ But these ‘schools’ were for forced military training”

Mawut remained on the move. Like most of the boys, he eventually left Sudan and wound up in Ethiopia. But it was a short stay. A new government came into power, forcing the refugees to leave.

Mawut and many others returned to Sudan, but it wasn’t long before they were again fleeing the country. Their goal was to reach Kenya. Mawut was one of the “lucky” ones who succeeded, finding haven at the United Nations Kakuma refugee camp.

Mawut was able to find some “normalcy” at Kakuma. He took advantage of the camp’s schooling program and also learned English.

Up until Kakuma, the boys had almost no, if any, contact with their families. Now there might be the occasional letter – but mail service was tenuous and family members were often killed, taken as slaves, forced into the military, displaced, or sheltering with others.

In 2001, at the age of 16, Mawut arrived in the United States with about 3800 other Lost Boys. Organizations such as Lutheran Social Services assisted with the resettlement process.

Mawut was placed with a foster family in the Grand Rapids area and completed high school. He went on to earn a bachelor’s degree in aviation management.

Mawut works two full time jobs – one as a factory administrator and the other as one of three lay leaders at the Sudanese Congregation in Wyoming. He is grateful for making it safely through the war and for the gift of coming to the U.S.

“It is a blessing,” he said. “It is something I do not take for granted. I thank God for helping my family.” He sends much of his earnings to his family in Africa.

Mawut also thanks God for the gift of Christ, Wyoming.

“We were meeting in an Episcopal church, but many of us had to travel a distance to get there,” he said. “With many of us working two or three jobs, and family responsibilities, our time is limited… so we were hoping to find a closer place.”***

Christ extended the invitation in 2005.

“They have been open and we have been welcomed,” said Mawut.

The relocated Sudanese have not forgotten the importance of community that is highly valued by their culture. There is also the shared language and culture, and the shared childhood experience of a long, brutal war.

“This [church] is where we come together,” Mawut said. “It is important socially and as a community.”

He looks confidently to the future.

“We want this to be a place where God’s Word is central and to be a comfortable place for children and strangers,” he said.

“As a people, we want to evolve in a healthy way. We want to be able to return to our country to give back the blessings we have received.”

Mawut and his wife, Ajah Kiir Aguer, live in the Grand Rapids area with their daughter, Arok, 5, and three sons: Ador, 8; Mawut, 3; and Kiir, 1½. The children are spending the summer in Kenya, meeting their grandma for the first time.

*It is estimated that many of the boys traveled 1,000 miles or more, on foot, at the mercy of the elements; facing malnutrition, dehydration, and disease; and risking ambush, robbery, and wild animal attacks.

***Most of the Sudanese congregation come from Anglican roots.