“I had to go ask our council president why this congregation was just randomly sending us money,” Priddy said. “When I discovered that the synod has this partnership program where congregations partner with congregations in need to support them, I was blown away.”

The seed for the relationship between the two congregations was planted in the spring of 2013 by Pastor Roger Hardy, who was winding down his tenure as Director for Evangelical Mission/Assistant to the Bishop for the North/West Lower Michigan Synod. At that time, outreach funds that Trinity had been receiving from Churchwide and from the synod were coming to an end and the congregation’s pastor, Colleen Nelson, was preparing to leave.

Now Trinity was poised to make some critical decisions about its future.

The decision to continue being “the church has left the building” (Trinity’s tagline) was a no-brainer. The congregation was deeply committed to its unique mission to inner city Battle Creek and to those in need in their community. 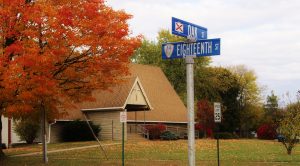 The people of Holy Trinity are committed to reaching out beyond the walls.

Trinity also had to look at further support systems for their current ministry to the community – as well as look to the future and anticipated needs. Re-applying for grants and hoping for continued support from past sources was part of the equation. But it would take more to help the congregation move ahead.

Pastor Wayne Shearier of Holy Trinity was in attendance at a Kalamazoo Conference meeting where Hardy encouraged other churches to “come alongside” Trinity to support it in its distinct ministry. Shearier took Hardy’s request to Holy Trinity’s Church Council..

“They readily agreed,” Shearier said. “Agreement was easy because Larry Sehy, our Council president at the time, had grown up in the Post [think cereal] Community of Battle Creek and had attended Trinity.

“However,” he continued, “even without Larry’s strong support, I’m confident that Holy Trinity would have agreed that our partnership with Trinity was an important part of our ministry.” 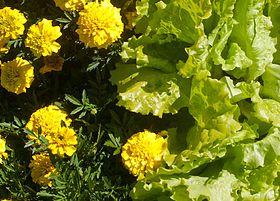 Both congregations have a community garden and share ideas on how to grow and maintain one.

They also chose to embrace all of the Mission Partners “three P’s” from which they could choose: Prayer. Presence. Presents.

In 2014, Priddy arrived at Trinity, and the relationship has blossomed.

Prayer: Both congregations raise up each other in prayer, but Shearier believes Holy Trinity could do more.

“From time to time we include Trinity in our public prayers,” he said. “We could do that more often. I’d like to see us praying for specific needs that they encounter.”

Shearier added that maybe the congregations could glean prayer concerns from the monthly newsletters they exchange.

Presence: During the first year of the partnership there were reciprocal visits of a group of each congregation’s pastor and council members to each other’s church, where each group had the opportunity to learn how the other group was doing ministry in their community, get ideas for their own ministry, and support one another.

Priddy was not yet at Trinity, so Interim Pastor Eric Johnson hosted the Battle Creek visit. Priddy was on board, though, when Trinity made its reciprocal trip to Niles.

During the partnership’s second year, the two pastors decided to do a pulpit exchange so they could meet with more than just church council members from each other’s congregations. But there was a downside: 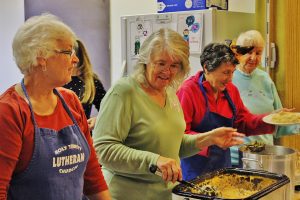 “The greater impact is that we’re putting our treasures in Trinity, Battle Creek and our hearts are following.” – Pastor Wayne Shearier

“We recognized that each congregation would only get one pastor’s perspective of the ministry,” Shearier said. “We talked about taking a small contingent with us to help ‘tell our story’, but that would mean key people missing the other pastor’s story [because they’d be traveling with their own pastor].”

“Bill loves to preach and preps a sermon in his head every week, even if he isn’t preaching anywhere,” Shearier said. “Bill suggested, and Kjersten and I readily accepted Bill’s proposal for a modified pulpit exchange.”

Presents: Both pastors see “presents” as being more than monetary gifts. Trinity has several mission partners, but Priddy and Shearier agree that the close proximity of the two congregations gives them great opportunities for growing a relationship. 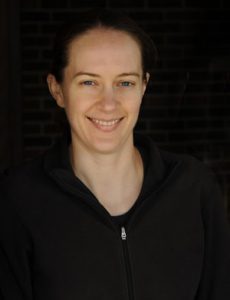 “The quarterly check from Holy Trinity, Niles, reminds us that the wider church believes in us…” – Pastor Kjersten Priddy

“There’s also the gift of knowledge and sharing that goes on when we are together,” she added. “We serve different contexts, but the struggles of how treasurers work, how to manage a community garden, organizing coffee hours, the mundanity of ministry is similar in all congregations.”

Priddy also appreciates the gift of Pastor Bill Hoerger, who has provided pulpit supply at Trinity during the winter, when Trinity’s retired-pastor-in-residence heads to Arizona.

“That’s an additional support to our budget,” she said, “in addition to letting my congregation hear a different perspective on the Gospel and our mission.”

Each year, Holy Trinity renews its commitment to provide quarterly presents for their Battle Creek partners, while Trinity gives thanks for the financial support from Holy Trinity and other partners.

“The amount we commit doesn’t have a great impact on the budget of either church,” Shearier said. “The greater impact is that we’re putting our treasures in Trinity, Battle Creek and our hearts are following. Each quarter we write a check; Trinity sends their thanks, we publish the thanks in our newsletter, and a piece of our congregational ‘heart’ grows.”

“The sense of support that money represents way outweighs its monetary amount,” Priddy said. “It is easy as a congregation, especially a struggling congregation, to feel like we are going at it alone. The quarterly check from Holy Trinity, Niles, reminds us that the wider church believes in us and the mission of God has called us to this place and gives us the strength and the courage to keep going.

“As a pastor new to the synod and new to redevelopment when I came to Battle Creek, it gave me a lot of confidence to know that other congregations believed in our ministry enough to financially support us,” she added. “What an amazing model of being church together.”