LANSING – Bethlehem Lutheran Church in Lansing, a congregation with a history of community outreach, will sponsor its 3rd annual Faith Family Fun Day on Aug. 8.

Bethlehem is located at the bottom edge of Baker-Donora, one of the poorest neighborhoods in Lansing. The median household income is just under $24,000 – which is below poverty level for a household of four.

“When I came to Lansing 30 years ago, this was THE neighborhood to avoid due to drugs and prostitution,” said Liisa Whitman, who chairs the FFFDay event. “That has long since been run out… but it is still a neighborhood that struggles to survive. 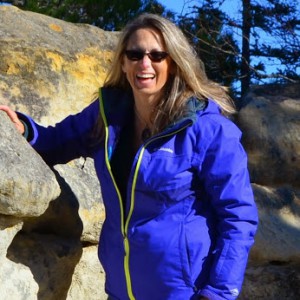 “I reluctantly took on the challenge.” – Liisa Whitman

“For years our Outreach Board provided a service to the surrounding children every Wednesday night called ‘Neighborhood Kid’s Night.’ We provided a healthy meal to any child who showed up, and had crafts, fellowship, and a casual bible lesson.”

The program lasted over 20 years, but ran its course.

Then the Baker-Donora Center, a neighborhood outreach program that housed its headquarters at Bethlehem, moved to its own place.

“They managed to thrive with community programs for about a decade,” said Whitman, “but they have almost ceased to exist, mostly due to their building being condemned and the main leader having health problems.”

Four years ago the Outreach Board stepped up to the plate. They brainstormed ideas for reconnecting with the neighborhood. Board chair Cheryl VanPatten proposed a community event named “Faith Family Fun Day.” It was slated for the summer of 2013.

Unfortunately, although the board had big plans and a huge desire, they realized, too late, that none of them had any idea how to create such an event.

“The first year failed miserably,” Whitman said. “It never got off the ground.”

But the board did not give up. Last year it solicited help from other members of the congregation.

“I was the only person with experience in running a large event,” said Whitman, “so I reluctantly took on the challenge.”

The biggest challenge was to bring the congregation on board.

“I had to essentially ‘sell’ an idea to a congregation that was already doing their fair share of giving – which included housing a Lansing Area Food Bank Pantry,” Whitman said. “I used every PR tactic I knew to excite them for months leading up to the day of the event.”

She was not disappointed: “We had about 100 members attend and drew in about 100 men, women, and children from the neighborhood. It was a beautiful sight.”

The free event included a food tent, games for all ages, an inflatable obstacle course, door prizes, and stage performances, featuring nationally recognized Christian hip-hop artist Agape. Also present was a community police officer assigned to the neighborhood who brought the canine unit. (Last year, the fire department came with a ladder truck and ambulance for the kids to explore and distributed free smoke detectors.) 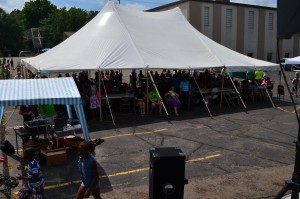 The impact of the event hit home for Whitman when her friend, Dorothy Martin, shared her experience. Martin sat next to a grandmother who brought her granddaughter for the meal.

“The grandmother told Dorothy that she had had no idea what she was going to feed the child that day, because she had no food,” Whitman said.

Following the event, the board used what it had learned to make a detailed list of what worked and didn’t work as they looked towards 2014. Whitman challenged Bethlehem’s pastors, Matt Smith and Jim Lichtenberger, to take a few huge steps.

One was to make the event more than “just a Bethlehem event.”

“After all, we have four churches within half a mile,” said Whitman.

The pastors agreed and Mt. Hope United Methodist Church chose to come on board.

The other step was taking advantage of the Showmobile (a mobile event stage rented from the city) and moving the next day’s worship service outside.

The numbers at last year’s event went beyond anyone’s dreams. Plans were for 275-300 people. Over 400 were fed.

The next day’s outdoor worship did not draw many from the neighborhood. But Whitman believes folks were still paying attention.

“I personally felt that the presence of our music and message was being heard, even if people were not physically in the tent,” she said. “From onstage I watched a lady in her backyard doing her nails, listening to the sermon.” 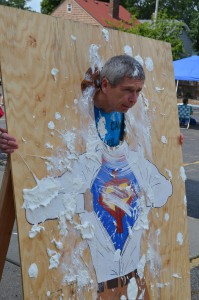 Pastor Jim Lichtenberger is a prime target for “Pie the Pastor.”

Whitman believes the addition of a Produce Tent was the most important change. With donations from the Lansing Area Food Bank, church members, and Andy T’s Farm Market, organizers put together 70 bags of produce to distribute.

“Fresh fruits and vegetables are expensive,” Whitman said, “so they are rarely in low income households.

She is also grateful for Mt. Hope’s partnership.

“The best part of the year has been the new relationships we’ve built with them,” she said. “I feel so blessed that our Methodist neighbors have stepped up and committed to the event with volunteers and finances.”

There’s wonder about what this year’s event will bring.

“This year the biggest worry I have is ‘will we have enough,’” Whitman said. “But, like last year, I’m sure God will provide for the masses.

“This winter, Bishop Satterlee attended Bethlehem in honor of our 90th anniversary. In his sermon he talked about Bethlehem’s wonderful history of service. But then he asked us to look forward.

“As I sat there, I already knew the answer: Faith Family Fun Day. That first year we were banking solely on the idea that if you build it, they will come. We had faith, and they did.”