Bringing it on home 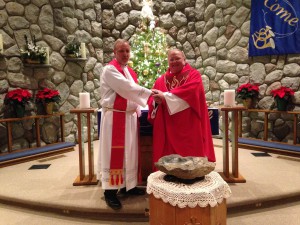 Pastor Roger Bauer (right) “brings it on home” at his installation at Hope in Rhodes. Assistant to the Bishop, Pastor David Sprang, represented the synod.

RHODES – He’s been a school bus driver, police and seafarers’ chaplain, parole officer, and bartender – for starters. He is a biker, a musician who has played Dixieland and conducted Bach’s “St. Matthew’s Passion”, has experience in radio and television, and a gatherer of intriguing artifacts.

Pastor Roger Bauer, raised in Auburn, Michigan, was installed as pastor of Hope Lutheran Church, Rhodes, in December. His education and ministry routes have taken him as far as the west coast and now he comes full circle.

When Bauer’s mother died unexpectedly in December 2013, Bauer felt the need to return to the Auburn area to be near his father.

While at the Moose Lodge in Estey (near Rhodes), enjoying a jam of local musicians, Hope’s former (retired) pastor, Reed Schroer, approached Bauer. Schroer had heard he was an ELCA pastor.

And so goes history.

Bauer’s down-to-earth, meet the-people-where they are style of ministry makes him a great fit for Hope.

Bauer describes his work as a seafarers’ chaplain as “sacred hospitality” – and that seems to be what drives his mission: meeting people where they are, reminding them that all of us are God’s children, and that none are excluded from God’s grace.

Being a police and seafarer’s chaplain (Oakland, CA) gave Bauer the chance to “be with folks where they are” in a big way. There were challenges and blessings, no loss of opportunities for bringing grace or hope to those he served.

“The big challenge with the police was getting the guys to talk about an event,” Bauer said. “They would have an attitude, at the beginning: ‘We’re men. We can cope on our own.’ The death of an officer was the hardest.”

Serving seafarers from around the globe has its own challenges, such as language barriers and crews away from home for long stretches of time. Most pull into dock every 30-45 days. There are also those who work the docks, such as longshoremen and truckers.

Bauer, whose call was through the Seamen’s Church Episcopal, was one of three chaplains. His partners represented the Vietnamese-speaking Roman Catholic and Korean-speaking Presbyterian Churches.

“We saw our main task as being ‘sacred hospitality,’” Bauer said, “bringing ‘the presence of God’ to the seamen and workers.”

Along with spiritual care, the chaplains supplied the sea-goers with other needs such as phone cards, magazines, and trips to stores.

“They liked to go to Best Buy and Target because they can get things cheaper here,” Bauer said. “Some of them liked to go to Victoria’s Secret to get nice things for their wives.”

Russians, Ukrainians, Koreans, Chinese, and others from around the globe were embraced with God’s hospitality.

The same goes for the people in and around Hope in Rhodes.

“I see my ministry at Hope as a mix focused on the congregation and outward,” Bauer said. “We have firemen, EMS, quilters, and others who express hospitality with their gifts.

“We want to continue to build on this – to treat everyone as a human being, with dignity; to be open to everyone,” he continued, “with the Gospel at the center – keeping in the real world while on a personal and communal spiritual journey.”

Bringing it on home…