Bringing others to Jesus, part 2

SYNOD – Part one of this three-part article on Living Water Ministries looked at this year’s on-site (Stony Lake, New Era) summer camp. Here, in part two, we’ll hear from Molly Smith, who was this year’s Day Camp director and who, along with other camp staff, worked at the National Youth Gathering in Detroit. 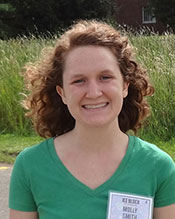 “Day camp this summer was a huge ball of excitement and energy,” Smith said. “We had ambitious plans to hold day camps at twelve different locations – and we followed through successfully, serving children in both synods.”

Congregations have responded enthusiastically to the day camp model and it has become one of the Living Water’s most popular programs. It serves as an outreach tool while giving kids a taste of church camp.

This year’s day camp theme centered on the Holy Spirit. Campers were given the opportunity to explore what the Holy Spirit was for them and the ways it was active in their lives.

“We sent counselors out across the state, serving an interfaith group in Sutton’s Bay,” Smith said, “an Episcopal church in Grosse Point, a Hispanic population in Southwest Detroit, and every group in-between.”

Smith and her staff gained as much from the day camp experience as the campers.

“The songs were silly and animated, and the campers were engaged and inquisitive,” she said. “Each camper that we worked with offered new enthusiasm and inspiration to our staff. After all, they are the reasons that we do the work we do. 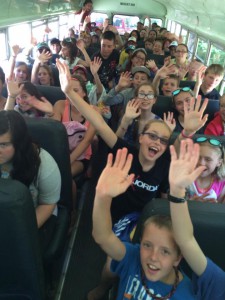 Day camp and the National Gathering impacts kids and staff.

“When a camper asks a great question about God or teaches the dance moves to a sing, it warms our hearts and reminds us that the work we do is important. This summer was definitely a wonderful reminder of that fact.”

In July, Smith attended the National Youth Gathering in Detroit where she and the summer camp staff worked as volunteers for various events and projects. Smith gave tours of the Underground Railroad Living Museum as part of Kingdom Detroit, a selection of educational and hands-on tours and activities centering on racism and justice.

“Working with First Congregational on the living museum was an extremely enlightening experience,” Smith said. “The outreach ministry is run entirely by volunteers out of the church’s basement. 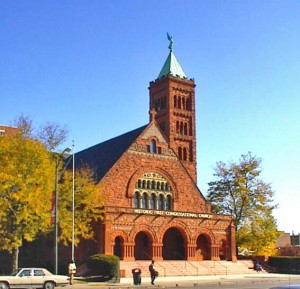 First Congregational Church was part of the Underground Railroad.

“Talking with the various people involved, I quickly realized that they were simply excited to tell the story of the brave people involved. Every character portrayed in the living museum was a real person involved in the Underground Railroad – an uplifting reminder of the power of good people fighting for justice.”

Smith found the young people who came to the living museum to be open and responsive.

“I talked to the youth groups about the role of racism in America today,” she said. “These groups came from all over the country, and I had the opportunity to share Detroit’s story with them. I explained the racist practices, white flight, and general decline of the city. Many of the youth had no idea what Detroit faced; they heard only the bad.”

Although Detroit’s story has had its burdens, Smith made sure to include the positives.

“We talked about God’s enduring presence in Detroit and the hope that the youth brought along with them,” she said.

“Our hope was that each youth would leave with a better idea of how much of an impact he or she could make through Christ’s love.”

Molly and her co-staff members might never know how many young people they impacted in the summer of 2015 – but that impact will grow and touch others through those children and youth.

That’s pretty much how the church works!

Molly Smith attends Northern Michigan University, majoring in special education. She is a member of Christ the King Lutheran Church, Gladwin, and is a youth representative to the N/W Lower Michigan Synod Council.