GLADWIN COUNTY – What if I were tell you that three out of four ECLA clergy are volunteer fire fighters? Well, at least that’s true for Gladwin County, where four ELCA clergy reside and three serve on their community’s fire departments.

The story begins in 1980 with Pastor David Sprang, a Gladwin resident who serves as a bishop’s assistant for the North/West Lower Michigan synod. Sprang’s first call was as to St. Thomas Lutheran Church, Trufant, where he was taken under the mentorship of Michael Anderson, the pastor of the neighboring Settlement Lutheran Church, Gowen. 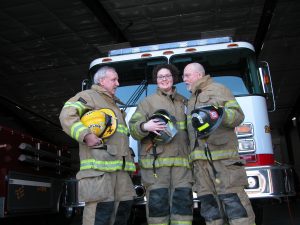 Anderson was a volunteer firefighter and encouraged Sprang to take the necessary training to join the Trufant Fire Department. Since he had decided as a little boy that being a firefighter would be “way cool,” Sprang didn’t need much goading.

“Mike said ‘once you get it in your blood, you’re hooked,’” he said, “and that is so true. It becomes a passion.”

Subsequently, Sprang has been a volunteer firefighter in Millbury and Leetonia, Ohio. When he was called as pastor to Christ the King Lutheran Church, Gladwin, in 1996, it didn’t take him long to connect with the Gladwin Rural Urban Fire Department. He also serves as the department’s chaplain.

While Sprang was at Christ the King, Hope Lutheran Church in Rhodes saw the arrival of Pastor Reed Schroer. As their friendship grew, Schroer was able to discern his own call to firefighting.

“David got me involved,” he said. “I listened to his stories and thought ‘I can do this.’”

And so he did. 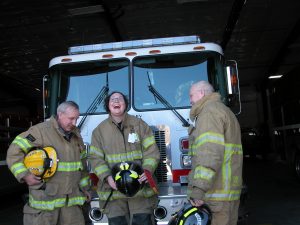 Sharing a moment of comradery and humor.

Schroer joined the Billings Township Fire Department and eventually became its chaplain as well. Although he recently had to give up much of the firefighting itself, he remains as the department’s chaplain and assists where needed.

“It stays with you,” Schroer said. “You won’t retire; you won’t quit.”

Meanwhile, Emily Olsen landed at Hope in the summer of 2012 to do a yearlong seminary internship under Schroer’s supervision. She blames him for her call to firefighting.

“It was Reed’s idea,” she said. “When he was interviewing me [before internship] he talked about being on the fire department… and I thought it sounded worth pursuing. So my firefighting days started along with my internship.” 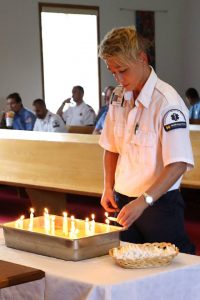 On the 10th and 15th anniversaries of 9-11, Gladwin County’s ELCA pastors held a Service of Remembrance in memory of those first responders who lost their lives that day and in appreciation for local first responders. Christ the King congregation played host.

After her internship, Olsen returned to Pacific Lutheran Seminary for two more years of study. In 2015, she received the call to Christ the King, Gladwin – where Sprang had served – and resides in nearby Beaverton. By now, Olsen had done some EMT training and was quick to become a member of the Beaverton Area Fire Department.

Looking back at their first runs as firefighters, the three pastors have no problem forgetting the scenarios.

“I was only in my second or third week of training in Trufant when we were called to a small structure fire,” Sprang said. “The adrenaline kicked in and it was exciting to see the ‘book work’ turn into action.”

Schroer had only been with his department for one week and had already experienced three structure fires.

“Officially, I couldn’t do anything fire-wise,” he said, “but I was able to talk with and care for victims and my colleagues.”

Olsen’s first run was while she was on internship.

“It was 2:00 in the morning, there’s a call, and Reed says ‘come along’,” she said. “We took off our ‘Vicar Emily’ and ‘Pastor Schroer’ hats… but we were still ministers.”

That being said, Olsen pointed out that even in this kind of scenario, the three of them are still pastors and representatives of Christ and of the ELCA. The same boundaries and skills apply in the firefighting community as in the faith community.

“You can’t separate yourself from your boundaries and who you are as a called and ordained minister of the church,” Olsen said. “What you say and the way you talk as an EMT, as a firefighter, or as a pastor –it’s all the same.” 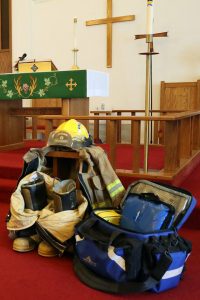 Fire and EMS gear stand alone in stark memory of those who once wore them.

Like members of a congregation, firefighters share a comradery and culture that isn’t always understood by outsiders. One thing that does differ is that, unlike Christ’s church, not everyone is welcomed into the firehouse family. Certain criteria must be met and those not willing to carry their share of the load might find themselves out the door.

On the other hand, like a congregation, that sense of community builds as the members spend more time together – especially as they share times of crises.

“There is a firehouse culture,” said Sprang. “You don’t talk about your colleagues behind their backs and you don’t know any firefighter who doesn’t have his or her own sort of piety.”

“It’s interesting that when you are at the fire, accident, suicide, or other crisis, everyone is on their best behavior,” Schroer said. “They are doing everything with dignity. Working as one is the only thing that’s going to meet this monster head-on. But when we’re back at the station, everyone has to let off steam. That’s when I need to assess how I can best be helpful here.”

But Schroer probably summed it up best:

“We need to stick with each other.”

NOTE:  Pastor Roger Buaer, who is Schroer’s successor at Hope, has served as a motorcycle police chaplain and as a chaplain to mariners from around the globe. He has assisted local fire departments in this capacity when needed.