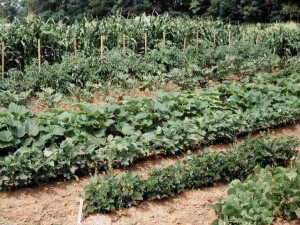 BATTLE CREEK – Members of Trinity Lutheran Church, Battle Creek, came up with the plan of creating a community garden in the church’s neighborhood. Although there were several attempts to establish the garden, there always seemed to be snags that prevented the project from taking off.

“No one in our neighborhood has a gardening or farming background,” said Trinity’s pastor, Kjersten Priddy, “so it was just a ‘foreign concept.’”

Then, while attending a Lutheran Social Services of Michigan event, a Trinity member became aware of the Burmese refugees being settled in the Battle Creek area. LSSM had spent two years seeking garden space for the refugees’ use. The Burmese were from farming communities and missed working the land.

LSSM and the refugees were more than glad to make the community garden come to life, and the people of Trinity are happy that the garden has come to fruition and is being used for a purpose beyond the original intent.

Last year, ten Burmese families participated in the garden. The plan is to have at least that many this year.

Said Priddy of the coming together of Trinity’s garden and the resettled Burmese community: “It’s a match made in heaven.”