PLAINWELL – One meaning of the idiom building bridges is “overcoming obstacles that are preventing two people from meeting”. It’s about reaching out, making connections, filling gaps. 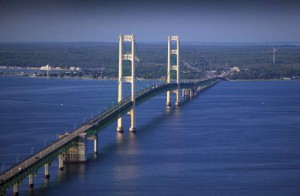 It was a 73-year span from the “Mighty Mac’s” inception to its opening.

Hope Lutheran Church, Plainwell, has taken this phrase to heart and, along with local partners, has gone beyond building bridges and has crossed them as part of an outreach ministry to persons who are often stereotyped or ignored. The mission of Bridges of Hope is “to help bridge individuals in Allegan County from poverty to lifetime sustainability.”

Before we hear Bridges of Hope’s story, though, a brief lesson in “bridges” might be prudent, using our own state’s magnificent Mackinac Bridge – fondly known as the “Mighty Mac” – as an example.

It began in 1884 as a tiny seed planted by the editor of the Grand Traverse Herald. He wrote that “the experiment to provide all-year service across the [Mackinac] Straits by boat had failed, and that if a great east-west route were ever to be established through Michigan a bridge or tunnel would be required.”

After years of studying the feasibility of building a bridge, garnering support, finding ways to finance and maintain the structure, politicking, and on-again-off-again plans (largely due to the U.S.’s involvement in WWII and the Korean War), construction began in May 1954 – 70 years after that “tiny seed” was sown. 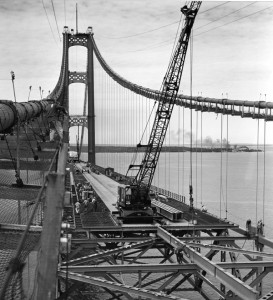 Shown under construction in the 1950’s, the Mackinac Bridge is still considered one of the world’s most beautiful bridges.

It also took patience, precision, and lots of courage.

Building bridges can be perilous.

Work was year-round – and we’re talking Michigan. Those familiar with the straits area know the weather-related risks. Those who’ve taken the time to appreciate the massiveness of the Mighty Mac and its location can appreciate the precariousness of building such a structure.

Crossing bridges is a leap of faith.

The Mackinac Bridge opened for service on Nov. 1, 1957 (a date which is probably not lost on some of us as being All Saints Day). Since then, thousands of people have traveled across the bridge. What went through the minds of the first travelers across that grand structure? Amazement? Anxiety? Anticipation? Maybe some fear?

Probably all of the above.

What happens once the bridge is crossed? 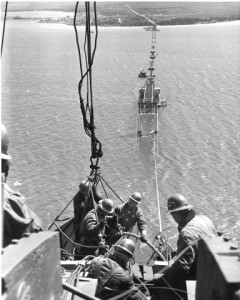 Those who have crossed the bridge move on to do whatever it is they hope to accomplish now that they’re on the other side. Crossing the bridge could be just one step in a much broader plan, well thought-out, with specific goals in mind.

On the other hand, it can be a last-minute whim, a detour off one’s path – just to experience the Mighty Mac.

Whatever the reasons for crossing, the goal is the same: getting to the other side.

What happens in the meantime?

This is where the long-term work begins. On-going vigilance is the key.

The Mackinac Bridge is under a continuous cycle of care that includes evaluating, replacing, refurbishing, updating, and whatever else is necessary to keep the bridge safe for travelers. From the bridge’s highest point to its underwater foundation, workers keep this critical link between the peninsulas in top shape. 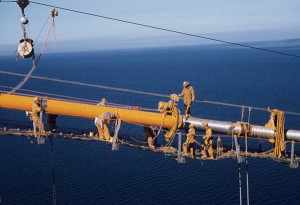 In this 1950’s photo, workers apply the first coat of rust-colored prime on a main cable.

Travelers will complain and lose patience when construction or other work slows them down. Those responsible for the bridge’s upkeep know and understand that.

But they also know and understand that their labors result in a greater good.

In part 2, we’ll look at Bridges of Hope – crossing the bridge.