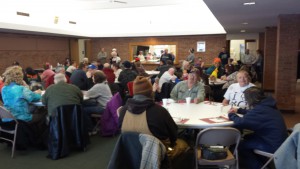 While planning for the upcoming year, the west side churches found that, due to an increase the number of participating churches, there was less need for their participation. This spurred three west side churches – Messiah, Westminster Presbyterian, and St. Alban’s Episcopal – to consider offering a meal a second day during the week.

Based on their experience with the eastside Food of Faith, the group decided that a pilot west-side program was justified.

“We determined that the pilot program could be run at Messiah,” said Messiah member Judy Miller, “and that Lent seemed to be the logical time period. If the pilot was successful, we’d consider continuing it.”

The pilot was a success and the west side Food of Faith is in its 13th year.

“We have multiple churches and a teachers’ sorority who participate on a regular basis to provide a meal each Thursday evening,” Miller said. “We serve at Messiah, January through June, then at Westminster, July through December.”

So far, the program has been fortunate in gathering volunteers. When the yearly schedule is set, churches volunteer to be in charge certain weeks. Some churches take on a few weeks, others up to nine weeks.

The volunteer churches take on the responsibility of the menu, food, and volunteers to do preparation, serving, and clean-up. The host church (Messiah or Westminster) provides coffee, punch, and other staples. Miller is on site at Messiah to make sure things run smoothly. Miller’s Westminster counterpart, Lois McPhail, does the same at her church.

Other churches involved are three Roman Catholic churches, a Baptist and another Lutheran church, and the Church of Jesus Christ Latter Day Saints.

Generally, 60-80 meals are served each week. Leftovers are delivered to the Samaritan Rescue Mission or the local women’s shelter. 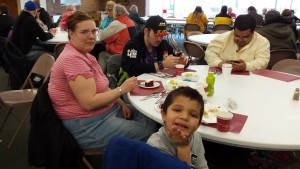 Initially, PR was done through a large yard sign, fliers at senior high-rises, and materials left with agencies such as FIA. Now most folks learn about the program via word of mouth.

Start-up grants came from Thrivent, the North/West Lower Michigan Synod, and the Presbyterians. Now there are gifts from individuals, organizations, churches, and local grocers and markets.

Probably one of the big surprises has been an unlikely source of volunteers.

“We’ve developed a partnership with the court system.” Miller said. “We have become a service location for those convicted of misdemeanors who need to do community service. Lately, we’ve been seeing juvenile offenders. Some of those assigned to us find the experience rewarding that even when their sentences are complete, they continue to work with us.”

Miller, too, has found Food of Faith to be rewarding.

“This is truly a mission project in which those of us who serve get as much as those whom we serve,” she said. “We have developed into a community with our regular guests on those Thursday evenings. We are blessed to have the opportunity to serve our community and to share in learning more about these members of Christ’s family.”