It began twelve years ago with members of Trinity Lutheran Church, Midland, joining other folks to help make sense of the wide path of destruction left by the hurricane.

Sanding drywall on the ceiling of a home in Chauvin, Louisiana, are Dort Sova (left) and Judy Enger (Feb. 2010).

Since 2005, Trinity members have become part of the Trinity Adult Response Mission Team that travels to areas of the country where there have been natural disasters. The group of volunteers takes two mission trips per year and have helped renovate, build, and rebuild 42 homes. The most recent venture was local. Last month, the team worked on three Midland homes that had suffered destruction in June’s floods.

Around 55 Trinity members have taken part in at least one mission trip. Generally, they partner with other churches or groups. Sometimes members from other churches, Lutheran and non-Lutheran, join the team. At one point, Trinity partnered with Bethlehem Lutheran Church, Lansing, for several missions.

The team’s five-member steering committee does the homework and lays the groundwork for each trip. Over the years, the committee has been open to making new connections – which has paid off.

The team’s first mission trip was in November 2005 and followed in the wake of Katrina. There volunteers mucked out damaged homes. Since then, though, the focus has been on rebuilding.

Both men and women participate, with no lines drawn as to who can do what. 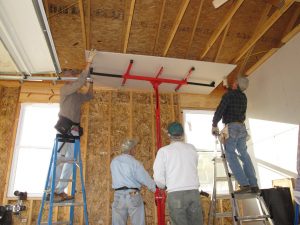 Installing ceiling drywall on a home in Nabb, Indiana that was destroyed by a tornado are (from left) Jerry Hahnfeld, Eldon Enger, Jim Leaman, and Lee Skogen (Oct. 2012).

Trinity provides some funding in the budget to support the team’s projects.

“However,” Enger said, “we rely on organizations who have a local presence to select the people with whom we build, to provide funding for building materials, and to provide housing for us.”

The congregation is very supportive. Quilts and prayer shawls are made by members and given to the homeowners with whom the team works.

Her name is Barb Bejeck and even though she cannot go on the mission trips, she has found her contribution not only makes her happy, but that others appreciate the time and love she puts into it.

“I can’t go and do a lot,” Bejeck said, “but I thought I definitely could do something. I love to bake cookies, so it seemed like a good idea…” 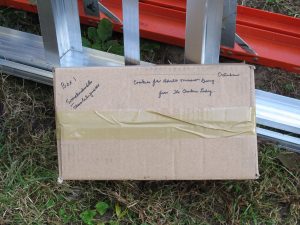 As of mid-October of this year she has baked 16,423 cookies to send along with the team.

Bejeck calculates four cookies per team member per day, wrapped two in a package. There are also cookies for the homeowners and other volunteers working alongside Trinity’s team.

“We’ve occasionally used Barb’s cookies as bribery or ‘thank yous’ for tradesmen, inspectors, and delivery truck drivers,” Engler said, “which she finds is worth a chuckle.”

“One year I asked them if there were any they didn’t like,” Bejeck said. “then I’d stop making those. Instead, I got instructed to add cowboy cookies to my list.”

Bejeck’s cookie-baking enterprise didn’t start until she had her own family.

“Mother wouldn’t let us in the kitchen,” she said. “I started baking cookies after my six kids were born. I decided it was too expensive to buy cookies, so I started making them. Chocolate chips were my first.”

She’ll look for just about any excuse to bake.

Equipped with careful planning, proper equipment and resources, gifts from Trinity congregation and the Cookie Lady, and the desire to serve others in Christ’s name, the mission team has no plans of slowing down. 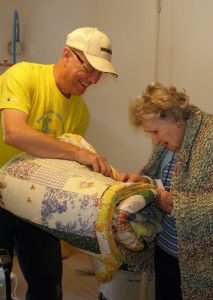 “Given the terrible disasters that have recently struck Florida, Texas and Puerto Rico, among other areas, we thought perhaps our story would encourage other groups to form and take action to help folks in need,” Enger said.

To learn more about the Trinity Adult Response Mission Team, you can contact Judy or Eldon Enger at 989-835-7211.