MACKINAC ISLAND – While on Mackinac Island for an event for church leaders and spouses, I sometimes caught an island taxi (horse and carriage). I enjoyed talking with the drivers and learning about the horses – and it struck me that these horses have something to say about mission and working together as the Church. 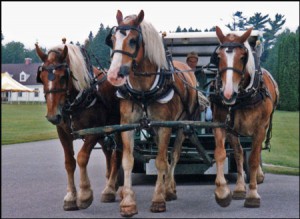 What can Mackinac Island’s horses teach us about being the Church?

Meet Buster, Hoss, Rowdy, and Fritz*. These horses spent an extended summer working on the island, where motorized vehicles are not allowed. They and some of their peers provided transportation for tourists, while others hauled luggage, garbage, food, packages, and other necessities.

Buster and Hoss worked as a team for the island’s Mission Point Resort. Buster was at the driver’s left, Hoss to the right, and Buster seemed to be the lead horse. He didn’t take much goading to stay on track. Hoss was well-behaved – just needed a little more reminding. But they did their job and did it well.

The horses were in no rush, giving their charges a chance to take in the scenery and enjoy the slower pace of island life. Passengers could talk as much or as little as they wanted – or could be silent, taking in the sounds of water traffic and horses’ hooves meeting pavement. 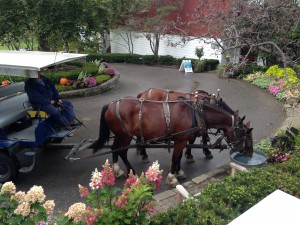 In spite of their differences, Hoss (front) and Buster accomplish a common task.

Although Buster and Hoss exuded confidence and good manners, they could still be distracted or try to do things their own way. The driver would gently, yet sternly, remind them who was in charge – and they would get back on course. Hoss usually took longer than Buster to get the message, but he pulled through.

Rowdy and Fritz did their job, too.

Rowdy was always on the move. Even when he was just on “stand by”, Rowdy’s tail and at least one foot were in motion. Sometimes he got overanxious and needed gentle admonishing from his driver.

Fritz was the perfect counterbalance for Rowdy. He deferred to Rowdy at the watering buckets, stood still – except for the occasional tail twitch – when he was supposed to, and, if he ever tried to go his own way, it wasn’t obvious to the passengers. Fritz was the “laid-back” to Rowdy’s zealousness. But they worked well together, pleasing their driver and those in their charge. 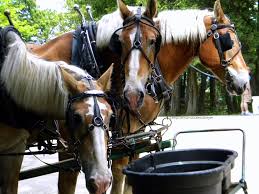 Periodically, the Mackinac equines were given short breaks for refreshment. Water and sometimes a treat accompanied encouragement from the drivers and loving pats from tourists and islanders. They returned to their work, grateful for the refreshment, inspired by the encouragement.

At the end of their tour of duty, the four horses and their roughly 500 co-workers returned to Michigan’s mainland (except for the Grand Hotel horses, which winter in Minnesota or Florida). This is a time for rejuvenation. Medical issues are addressed, personalities are monitored, and tender loving care is given in an effort to maintain the horses’ fitness for their work.

A driver said the horses leave the island in waves as the number of tourists dwindles, and that they are able to sense when other horses are leaving and when they themselves are about to leave. Some horses exhibit behavioral changes such as restlessness, sassiness, or a sort-of melancholy.

But they must move on.

And when they return to their mainland destinations, these majestic beasts find they are still part of a caring community, receiving encouragement, refreshment, and energy to carry out the next year’s task.

*Unfortunately, because Rowdy got so much attention, folks couldn’t seem to remember his partner’s name – thus the name “Fritz”.