Music in a ‘Lutheran sort-of-way’

MICHIGAN – Jonathan Rundman is a full-fledged “Yooper” – a Lutheran Finnish-American (six of his great-grandparent came from Finland, two from England) raised in Michigan’s Upper Peninsula. I sat down with him for a chat at our recent synod assembly, where he was our musician, and found him to be passionate about his family, his roots, his music, and his faith. 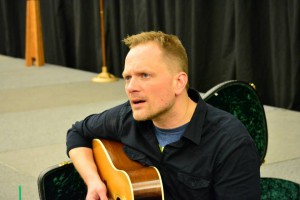 Jonathan Rundman and his music powerfully impacted the 2015 synod assembly.

A native of Ishpeming, Jonathan Rundman has fond memories of his childhood, where church was the center of his social life and school was something to be tolerated.

“I grew up at Bethel Lutheran Church,” Rundman said. “It was a multi-generational, family-oriented church. I loved going to church. My grandma was the organist and I loved the music – the hymns, the liturgy.

“My school was small, very non-homogenous and non-diverse and, unless you were an athlete, there really wasn’t much offered. I didn’t do sports and I didn’t do the ‘typical’ Yooper things like hunting or snowmobiles… so I spent a lot of time at church.”

Summers were a favorite family time at the cabin – swimming, saunas, and enjoying the outdoors. The rest of the year there was little to draw his interest – no mall, no hangouts – except church.

By the time Rundman began high school, he knew he was called to make music his life. He had begun piano lessons in the 4th grade and began to teach himself the guitar at age 16. He listened to and watched other musicians.

“I listened to the radio a lot and taught myself songs,” he said, “and I learned lots and lots of hymns.”

Then along came MTV.

“I spent hours and hours watching and listening to ‘80’s rock and roll,” he said. “I watched [the musicians] play their instruments and learned from them. The music videos gave me a music education – but, most importantly, they were a window to the outside world.”

The idea of being a band teacher crossed Rundman’s mind – fleetingly. Then he attended a church youth gathering and knew he wanted to share his gifts in a different way.

When he graduated from high school, Rundman joined a Lutheran Youth Ministry group, playing church camps, youth gatherings, and congregational concerts. He knew he was on the right track.

Known for his innovative arrangements of old hymns, bringing well-known secular songs into the religious realm, and his own compositions, Rundman has also become proficient in the music of his ancestors. Trips to Finland have connected him with family and Scandinavian/Nordic music, especially waltzes and polkas. 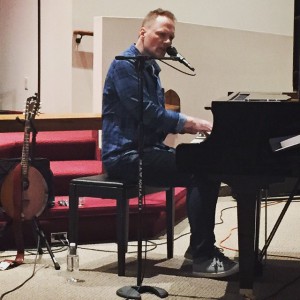 Rundman plays a variety of instruments, such as the mandola (left), a cousin of the mandolin

Rundman has had the opportunity to play alongside some of the world’s best Nordic musicians and is grateful for their influence on his music. There have also been other sources of inspiration.

“My [paternal] grandma started playing the church organ when she was 12 and played for 60 years,” he said. “My [maternal] grandpa had a houseful of instruments and my uncle helped me appreciate bluegrass and country.

“John Mellencamp has also been a big influence. When I first heard his music I thought ‘these are my songs’ – music of farms and of the Midwest.”

Rundman still uses his grandpa’s banjo and harmonica – and, along with the guitar and piano, also plays the harmonium and mandola.

What has brought joy to his vocation? “I love the idea that my recordings are songs people take into their lives and make it part of their life. Albums are like my children: I write it (take care of my children), then then they go off to live their own lives.”

What about a challenge? “Having children and being a stay-at-home dad. I had to stop writing for six years (2004-2010) and I wasn’t very productive. But I in no way regret that.”

What sustains him? “I like to use that phrase ‘the great cloud of witnesses’. In recent years I’ve discovered a very long river running through the ages of time… It’s a grand story stretching back eons. When I became a parent my perspective on that ‘long line’ solidified. But my wife is my primary muse. She encourages me, supports me, and understands the theological concept of ‘vocation’.”

His mission: “I would say my mission is to apply my music career in a ‘Lutheran sort-of-way’. I have certain gifts God has given me – and with that comes a responsibility. It’s bringing a ton of encouragement to a community’s need [of God’s gift of grace] – singing, writing new songs for people to listen to and to sing. I hope to fill a need, fill a void, if I can do it.”

And what did assembly-goers think? “Jonathan’s music is inspiring and fun. I hope to bring some of it back to my congregation to use in our services.” – Cindy Vlasic, All Saints, Mason

“His music is faithful, fun, and engaging – and it helps that the theology is sound. He inspired us to work efficiently so we could sing more praise and finish [assembly] business early!” – Liz Retz, St. Timothy, Midland

Rundman lives in Minneapolis, Minnestoa with his wife, Dawn, and their two children. Go to www.jonathanrundman.com.