One dinosaur and a food truck 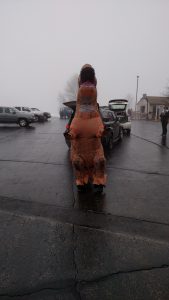 Sub-freezing temperatures didn’t keep this dinosaur from serving her community.

Wait! What? There’s a dinosaur?

You’ve got to admit, it’s not every day you see a dinosaur at a food distribution – if ever – but that’s exactly what happened at Christ the King Lutheran Church in Gladwin.

Among the volunteers were seven 2nd-7th grade youth and… well… a dinosaur. A totally unexpected volunteer, the over-sized reptile did more than take up space or rattle the timbers. She warmed things up with exuberant hugs and encouraging pats on the back.

“The dinosaur was a big hit,” said Christ the King member Dawn Wiseman. “She made the day extra fun.”

Wiseman spearheaded the food distribution four years ago through a community-wide fundraising and awareness event. Her dream was to bring people together to help their neighbors who are in need on a consistent basis. 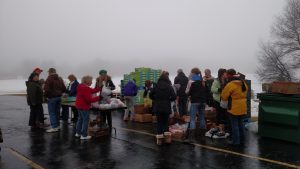 No matter the weather, volunteers gladly give their time and labor.

It didn’t take long for the community to catch on.

Jill Philips (St. Timothy, Midland), along with Wiseman, is a member of a six-person steering committee that oversees the program and has tracked its evolution.

“We partnered with the Eastern Michigan Food Bank of Flint (EMFB-F), formed a coalition of churches interested in supporting the program with funds and volunteers, and took on the name Gladwin Ministerial Association Mobile Food Pantry,” she said.

“We now serve 210 families the third Saturday of every month,” Wiseman said. 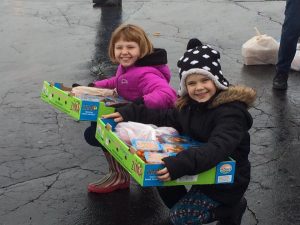 All smiles and ready to serve!

On January 21, each family received: 10 pounds of frozen chicken; supplies for two spaghetti dinners; canned vegetables; a jar of peanut butter/ and what is known as a “straight truck – ten skids of miscellaneous food (bread, fresh vegetables, etc.) divided equally among the families.

Families must register at Christ the King prior to the distribution and slots are filled on a first-come, first-serve basis.

“Our registration day has developed into a social event,” Wiseman said. “Guests come
early and play cards or socialize while enjoying coffee and cookies that are provided/donated by congregational members.” 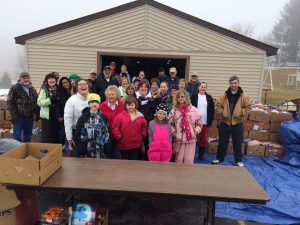 Meanwhile, volunteers and funding expanded beyond churches and grants to local businesses, groups, and individuals. Some of the volunteers have been on the receiving end of the distribution and want to show their gratitude by giving back to their community. Last year, the steering committee chose to rename the program “Gladwin/Beaverton Community Food Distribution” (GBCFD).

As for the dinosaur… it is speculated that another visit is in the future… but no one is sure when that will be. But she can be assured that she will be a “food distribution day” topic for many months ahead.