LANSING/PINE RIDGE – “Pinpricks of hope” is a two-part article about a mission trip made by members of Bethlehem Lutheran Church in Lansing to the Pine Ridge Indian Reservation, South Dakota. Part 1 gave background on the reservation. Part 2 focuses on the trip itself. Thanks to Kelly Carpenter for the photos.

Kelly Carpenter and Steve Viele were among ten members and one former member of Bethlehem Lutheran Church, Lansing, who went on a mission trip to the Pine Ridge Indian Reservation, South Dakota in May.

Viele already had ten mission trips under his belt and had one chief goal: to connect with the Pine Ridge Retreat Center (a Lutheran/Lakota shared ministry) and the people. The interest was piqued by former Bethlehem member Max Miller, now a pastor serving in South Dakota. Miller did his seminary internship at Pine Ridge.

“After supporting medical missions in Africa and Dr. Mark Monson, a member of our congregation serving as a medical missionary in Liberia, for several years, we were looking for a new project,” Viele said. “We already seemed connected to Pine Ridge through Max’s experience, so it seemed a natural choice.” 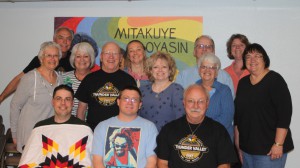 Team members and friends look forward to a continued relationship with the reservation.

Spiritual and emotional preparation, with prayer being foremost, began in August of last year. ELCA Pastor Karen Rupp, director of the retreat center, recommended some reading.* The mission team was also able to direct questions to Miller via e-mail.

“We weren’t quite sure what to expect,” said Carpenter, who had already been on seven mission trips, “so we went with an open mind and not as many goals as just willingness to do whatever they asked – which we did.”

Some of the tasks at the center were plumbing work, installing a hot water heater, starting a roofing project, yard work (also at offsite locations), and working with the kids.

“We also did sightseeing to learn all we could about the people and the culture,” Carpenter said.

Carpenter and Viele describe the reservation as: “not many trees, sparsely populated, very poverty-stricken with deplorable housing, dogs everywhere, much un-farmed land.

99% of the reservation’s population is Native American, Lakota tribe, living in the second poorest area in the Western Hemisphere – 85% unemployment; per capita income $6,000-7,000; a woman’s life expectancy 53 years, a man’s 48.

These statistics are about a people, humans made in God’s image. They are also a brutal reminder of a piece of history that some would rather forget.

“There are many struggles,” Viele said. “Unemployment, suicide, alcohol, and inhalants are big problems. There have been 19 suicides so far this year (as of May 2015).”

“We met many children, many artists – and some intoxicated people in need of coffee and a prayer,” Carpenter said. “Most struggle with alcoholism in their families. All of the artists we met are recovering alcoholics.” 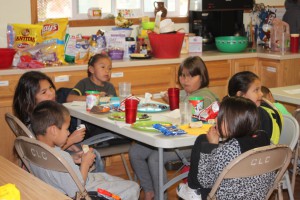 Lunch is part of a day’s activities for children.

Although hopelessness can run deep, there are pinpricks of hope along the way… tiny flecks of light that dare to challenge despair. Many of those pinpricks can be attributed to the work of the retreat center and the Lakota’s strong emphasis on family and heritage.

“Every day there is some activity at the center for children,” Viele said. “Pastor Karen drives a van to a neighborhood, toots the horn, and the children come running. At the center they play games, make crafts, have Bible study, do puppet shows, and share a meal. I think it’s safe to say we fell in love with many of these youngsters.”

“Pastor Karen is an amazing woman with courage, patience, and heart,” said Carpenter. “I enjoyed being able go with her to pick up the children. It was a real eye-opener.

“It was also good hearing news of hope at the three schools we went to,” she continued. “I really enjoyed a speaker at the Red Cloud School who was such a positive success story. She was my kids’ age – so I could relate to her.”

“There is also great joy in celebrating the educational accomplishments of their children,” Viele added. “We attended an 8th grade graduation of a young man – the youngest of 15 children.”

Households filled with multiple generations are not unusual.

“Family means everything to them,” said Viele.

There is Valerie, who, like everyone else, was excited about an upcoming pow wow.

“She said that when she has a family gathering, 100 people come.”

There is Chris, a 20-year-old Lakota who worked alongside Viele.

“Chris has one child and four stepchildren. He lives in a home with them and two of his wife’s relatives. Chris is a handyman, mostly working on cars, but learning home repairs. He was an excellent worker and willing to learn.”

There are the women at the retreat center who prepare lunch for the kids.

“They have three families living in their home,” Carpenter said. “Many three-bedroom homes house 15 or more people.” 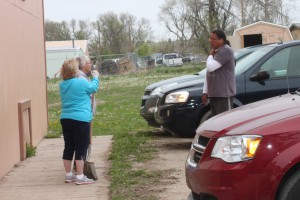 Team members connected with the Lakota and heard their stories.

Matt Smith, associate pastor at Bethlehem, also went on the trip and looks forward to a continued relationship.

“This mission trip was the first of what we hope will be regular trips to the retreat center,” Smith said. “In fact, two of our members have already made a visit along with their daughter and grandchildren.

“We are just beginning to form relationships with the people and explore ways that we can join in helping to meet the great needs on the reservation. The mission offering we receive once a month has been designated to fund a ministry position at the center that will be focused on youth and young adults, primarily working on suicide prevention.”

Pinpricks of hope. God’s work. Our hands… and our hearts.

*Neither Wolf nor Dog by Ken Nerburn and Toxic Charity by Robert D. Lupton.