Ringing and singing into the future

MIDLAND – “It only takes a spark to get a fire going” says the first line of an old church camp song – and Trinity Lutheran Church, Midland, is finding one way to do that in the world of music.

The Trinity Music Academy (TMA) for Children and Youth is a weekly afterschool program that serves as a spark to set young people on fire for church music. Kids 4 years old through 6th grade come to not only learn how to play notes and sing songs, but to aim for music literacy. 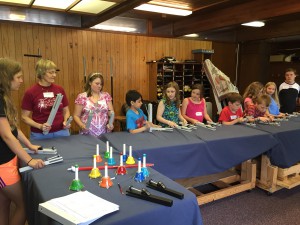 The time begins with a healthy snack and fellowship, blended with rhythm and music activities and games. The group is then divided into two age groups for their hands-on learning.

The Rainbow Ringers, ages 4 years – grade 2, work with handbells that are light weight and color-coded. They also have vocal music time as the Cherub Choir. Grades 3-6 make up the High Chimes Choir and the Seraph [vocal] Choir. They can also opt for organ lessons or drama.

The TMA is staffed by volunteers and resource people.

“I think it’s important to have as many adults on board as possible,” said Dianne Granstra, who oversees the academy and is Trinity’s Music director. “Kids click differently with different people. Sometimes it’s that one adult that catches a child’s attention.”

Volunteers organize snacks and name tags, serve as accompanists, and share their talents with the kids. The core is five teachers (active and retired) who bring their musical knowledge and love of music to the program. Other resource people do the same. 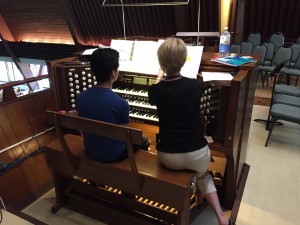 Kids can opt for organ lessons from Trinity’s principal organist.

Trinity’s principal organist, Patti Bowen, donates her time to give organ lessons. She prepares the learners to play at worship throughout the year. The lessons have become so popular that Bowen has started a waiting list.

This year, a Dow chemist who is also an organist, started out this year’s TMA helping the kids learn about rhythm and how it applies to song-singing and bell-ringing: the “science” of music.

Other resource people pop in at various times. For example, a professor of writing encourages creativity or a pastor talks about worship-related things such as the role of communion assistants and lay readers or what happens in worship.

The various choirs will do their first presentation of the year on Reformation Saturday, Oct. 24. Until that time, the kids will have a different focus each week.

For instance, as stated above, the first session taught rhythm. Session two is introducing the song using drum (tubano) circles. The kids drum what they learned the previous week. If everyone isn’t on the same page at the end of a session, not to worry… the schedule isn’t set in stone. There might be a second session on the same topic.

Along the way, the choirs will focus on Psalm 46 and will talk about what’s important about Reformation. Music and activities will reinforce the theme.

“Everything will build up to what we’re doing in worship [on Oct. 24],” Granstra said. 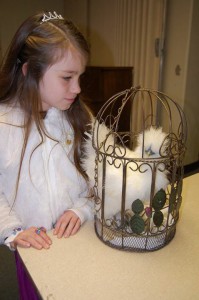 Pearl the Chicken made her acting debut as she posed as a dove at the manger in last year’s Christmas program. Her human friend is Katie.

Along with such presentations and the annual Christmas program, the young musicians do a musical every spring.

Granstra and the staff refrain from referring to the presentations as “performances”.

“We tell the kids that when they are in worship, they are not performing,” she said, “and so we try to discourage applause. I remind the children that our effort might be useful to God in whatever way he needs it.”

The congregation’s senior pastor, Gerald Ferguson, has nothing but praise for the academy and the children’s contribution to worship.

“Just seeing the eyes of first and second graders when they become aware of the response of the congregation – they are elated,” he said. “The willingness of the organists and musicians to mentor… to look at a 1st grader and acknowledge a gift… to make children feel they are a valued part of the community – that’s what church is all about.

“I know I wouldn’t be where I am today if it weren’t for someone in the church community recognizing and acknowledging my gifts.” 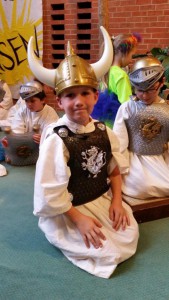 Henry as the Captain of the Guards in the play “Malice in the Palace”.

Granstra, who began piano lessons at age 7 and voice lessons as a teen, echoed Ferguson’s sentiment.

“I still tell my home congregation that I don’t think I’d be doing what I’m doing if they hadn’t welcomed and nurtured this little girl,” she said, “even if she wasn’t always quite on key.”

Granstra strives to pass that same sense of love, welcome, and nurture to the children who pass through Trinity’s doors.

“I often remind the children that nothing makes an adult happier than hearing children sing,” she said. “After every presentation I tell them ‘I’ll bet someone’s heart was made better today.”