AUBURN – Two “Mitten Synod” pastors “revved it up” on July 24 as they participated in the annual Faster Pastor race at the Tri-City Motor Speedway in Auburn.

This was the first race for both men.

“I found out about the race from a member of the congregation, Jodi Dahley,” Schmidt said. “She passed the information along to me and encouraged me to apply for participation.”

Sprang’s introduction to the race was a bit more involved. 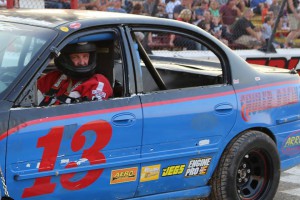 Pastor David Sprang’s role as a volunteer firefighter introduced him to the track.

“I volunteer as a firefighter in Gladwin,” Sprang said. “In February, we responded to a house fire where the residents mourned the loss of their cats. Some of us went back into the house and found them – alive.

“A few months later, I got a message from the residents’ daughter (who is also the office manager for the speedway), who asked: ‘Are you the pastor who saved my parents? Would you like to enter the Faster Pastor race?’”

The men enjoyed preparing for the race as much as the race itself.

“Two practice sessions were offered to allow us to experience some driving before the race,” Schmidt said. “I did a lot of listening not only to the car owners, but to members of our church and our community that have race experience.”

“A local driver loaned his car and gave us advice on driving the track,” Sprang said, “then we got to run five laps each time to practice. I also prayed that I wouldn’t crash. I think my wife and the bishop prayed, too!”

“Just talking about the race was half the fun leading into the event,” Schmidt added. “Finding a new way to engage and spend time with members of the church that are ‘race fans’ was a real treat.”

The men had mixed thoughts while they raced.

“All the pastor drivers seemed very nervous the night of the race,” Sprang said. “For safety, the pastors raced stock cars with six cylinder engines and front wheel drive. Our top speeds were 60-70 miles per hour.

“I raced in the first heat, which was for inexperienced drivers. We were lined up in single file according to the amount of money we raised, so I was third out of four. We held our own on the track, but I wasn’t able to advance and ended up in third place and didn’t qualify to continue.”

“I raced twice,” Schmidt said. “First was a qualifying heat and the second was the feature race where the top two finishers from each heat raced. 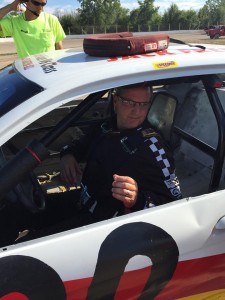 Pastor Rod Schmidt was the overall winner of the ‘Faster Pastor” race.

“Truth to be told, it was both terrifying and exhilarating at the same time. My heart was pumping so fast and the adrenaline rush was powerful! In the first race I jumped out front quick and stayed there. At the end of the race all I was thinking was ‘keep it on track’ and don’t crash.’

“I couldn’t get the car in third gear and nearly blew the engine,” he said. “I started in third position that race. The first two cars had a small crash the first lap, stopping the race. At that time the owner of my car was able to get to me and get the car in gear. He also advised me to keep the car in high gear.

I was able to chase down the leader on the second lap. I’m not certain what our top speed was. But the owner said I ran a few laps as fast as he could and was proud of my effort. I’ll bet I didn’t go over 60 the entire race.”

There were also some surprises along the way.

“The most surprising aspect of the entire event was how excited our church members got about the race. We had a great deal of donations and support. I was blessed to get some generous donations and a hard-earned small donations as well.

“There were 70-80 people from Zion in the stands, all cheering and having a great time. I was blessed to have my entire family attend and enjoy the race as well.”

“I was surprised at how difficult an oval dirt track is to drive on,” Sprang said. “It’s a 3/8 mile track, so most of the driving is in turns. I’m glad I only spun out once (at practice). 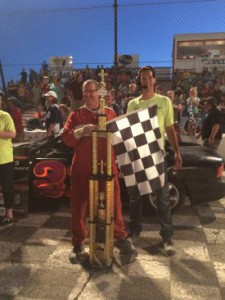 Schmidt was the overall winner. He received $500 to add to the $3,400 he raised and a six-foot trophy. To top it off, the winning car’s owner parked the vehicle in front of Zion the following Sunday.

“It was a huge surprise,” Schmidt said. “But, in the end, taking the chance to connect how God was present in the event was a great blessing all of us at Zion could share.