BRIDGEPORT – St. Matthew’s Lutheran Church in Bridgeport recently stepped up to raise awareness and funds for combatting hunger. On Sept. 27, over 40 people – coming from as far as 80 miles – gathered at the church to participate in “Taking Steps Against Hunger”. 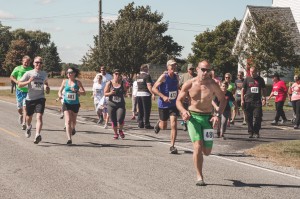 Participants chose from a four- or six-mile route.

But the event didn’t “just happen”. A great deal of organization, detail, time, and manpower were invested – as were a generous amount of determination and prayer.

It took St. Matthew’s member Diedra Knox to plant the seed and the willingness of others to hop on board to help nurture and grow the event.

“Diedra, a member of our Evangelism Commission, came to our Church in Society Commission (CISC) with the idea of having a race to support local food pantries,” said Jean Schluckebier, president of the congregation. “I attended on behalf of the Executive Committee and as a supporter of a newly organized local food pantry called ‘I Support the 1%’, which serves needy veterans and families of active military personnel struggling to make ends meet.” 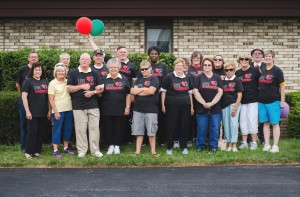 Volunteers made the event run smoothly.

The CISC was already a strong supporter of efforts to feed the hungry, so Knox didn’t have a hard time convincing the group to take up the challenge. The congregation supports the Bridgeport Food Pantry housed at Bridgeport Community Church and the Saginaw Metro Ministries Food Pantry housed at St. John’s Lutheran Church in Saginaw, and has been a regular donor to the ELCA World Hunger program since 1976.

“I felt strongly that the event would serve several goals,” Knox said. “It would be an opportunity to make our presence known in the community, provide support for the food pantries we currently serve, make people aware of the new pantry serving our veterans, and provide a fellowship event for our members.” 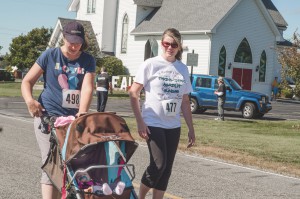 It was determined that the cost of the undertaking would be around $2,000-2,500. Knowing the congregation would be hard-pressed to come up with these funds from its operating budget, it was decided to invite local businesses to sponsor the event at various levels. In return, the businesses would receive advertising opportunities based on their level of support.

“To our surprise, 28 individuals and businesses responded with money and/or in-kind donations,” Schluckebier said. “I also applied for grants. We were awarded $700 from the Bertha Wilson Memorial Fund overseen by the Saginaw Metro Ministries Board and our synod leadership, and we received two grants from Thrivent Financial.”

With a firm financial base, the planning committee was able to move ahead. 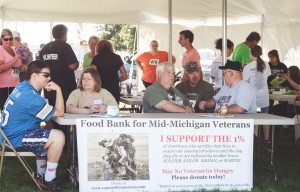 I Support the 1% was on hand to share information about the pantry.

“Advertising is a key component to the success of any endeavor,” Schluckebier said. “I enrolled the event with an on-line website called RunMichigan.com. Diedra found an online website for handling registration and Joanna Davis sent the letters to area businesses requesting their support. Our church secretary, Jane Teckentien, designed posters and sent them out to churches and businesses.”

In addition, public service announcements were sent to area radio stations and newspapers.

“The best evangelism idea was the distribution of door hangers along the race route,” Knox said. “They warned our church neighbors of traffic tie-ups during the race. This courtesy brought many positive comments from the residents and further promoted the event. In fact, a local farmer was pleased to know in advance since he was harvesting soybeans and wondered how our race would interfere with getting to the local elevator.” 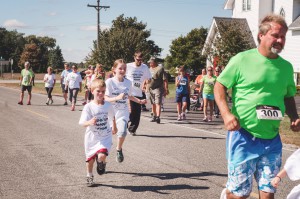 As the day of the race approached, organizers began to wonder if they were going to pull it off. Only 21 people were preregistered.

“We worried whether people would come to a small church on the corner of a farm field in the middle of nowhere,” Schluckebier said. “We feared our first attempt would be a total failure.”

The organizers had been warned that dedicated runners don’t preregister. If they feel like running when the rise in the morning, they’ll search the web for a race and just show up.

“The weather [on the day of the race] promised to be beautiful and sunny with moderate temperatures,” Schluckebier said. “It was a great day to run or walk.”

With the race to begin at 2 p.m., volunteers prepared by setting up water stations at the route’s intersections, putting up sponsorship and facts about hunger signage along the route, setting up a PA system, and filling free goody bags. The bags were filled with pens, coupons, advertisements from sponsors, a brochure about St. Matthew’s, and a pencil announcing next year’s race date of Sept. 25. 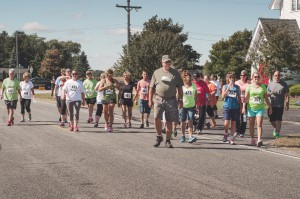 “St. Matthew’s has long had a heart for the hungry.” – Pr. Rachel Laughlin

A professional race timing organization arrived at 12 p.m. and shortly after 1 p.m. people began to arrive to register and mill around the church grounds. Some came from as far as 80 miles.

By 1:45 p.m., over 40 people had registered – with only two from St. Matthew’s. They could run or walk a four- or six-mile route. The race began promptly at 2 p.m. with law enforcement providing safety and security along the route.

During the race, volunteers set up a table with free items for the racers – bottles of water (donated by the local Lions Club), bananas, granola bars, and the goody bags. Although not everyone went home with winners’ plaques, the participants were good-natured and impressed with the event.

“Everyone who was surprised to discover this was our first attempt at organizing a race,” Knox said. “They complimented us on a well-organized event and indicated they would return next year. They especially enjoyed the hunger facts posted along the route and said it truly made them aware of the food challenges people face around the world.” 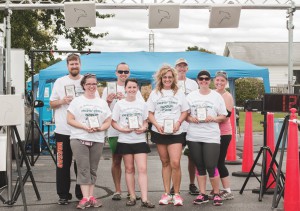 The winners, along with the other racers, hope to return next year.

St. Matthew’s pastor, Rachel Laughlin, is grateful for the care and hard work put into the event.

“St. Matthew’s has long had a heart for the hungry,” she said. “We love to feed people! Taking Steps grew out of that love and out of many people’s gifts for ministry coming together. I was blown away by how God brought it all together.

“One had a knack for getting publicity. Another had the gift of hospitality. Another thought through logistical details. Another organized volunteers. One was good with money, another took great care of all the mailings. People delivered door hangers and flyers, passed out water, wrote grants, took pictures, cheered on the racers, and designed tee shirts.

“It took the whole body of Christ working together to make this happen. It was a joy to witness!”

To date, around $1,400 has been raised to divide among the three pantries [above] and ELCA World Hunger. Donations are still arriving and plans for next year are underway.

Meanwhile, one of the recipients will receive an added gift.

“A local women’s group is donating $9,000 to the Bridgeport Food Pantry as a direct result of learning about this pantry through the event,” Schluckebier. “One of the participants is a member of this women’s group and submitted the suggestion to support the pantry.”

The gift is coming at a time when the pantry’s board members were considering the reduction of food and families to be served.

“The Holy Spirit was definitely working among us through the event,” Schluckebier said.

Next year’s hope is to double the amount of participants and funds raised.

“Taking Steps Against Hunger won’t wipe out hunger overnight,” Knox said, “but it is a step in the right direction.”

Photos courtesy of Kimberly Eastman of SOS Photography. Eastman, whose grandmother belongs to St. Matthew’s, donated her time and talents to the event.