NEW ERA – “It was a good year,” said C. J. Clark, as he reflected on last year’s summer camp and looked toward this year’s upcoming season, “and we expect this year to be a good one, too.”

Clark is the executive director of Living Water Ministries (LWM), a joint program of the North/West Lower and Southeast Michigan Synods, Evangelical Lutheran Church in America.

Under Clark’s vision and steady hand, LWM summer camp has been moving forward by offering quality programing based on community, inclusivity, faith and leadership formation, and the current and future needs of the Church and the world. Program director Lori Pranger and LWM’s board have also played integral roles in the program’s evolution. 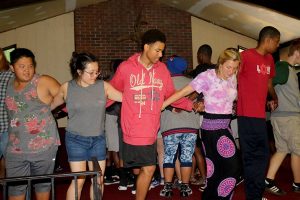 “Bridge Builders” brings youth from across the country to address leadership and racism in a safe, caring, faith-forming environment.

“Our mission statement clearly defines who we are,” Clark said.

The statement reads: “Bringing together all of God’s children to experience Christian community, grow in faith, develop leadership skills, and serve others.”

“We were intentional with the phrase ‘all of God’s children’ because we didn’t want to leave anybody out,” Clark said. “It’s a guiding statement that holds LWM accountable to reaching out to as many people as possible with the gospel through the camp experience.”

“Regretfully, we had to turn away fourteen staff applicants,” Clark said. “It’s a nice problem to have, but I wish we could give everyone the opportunity.” 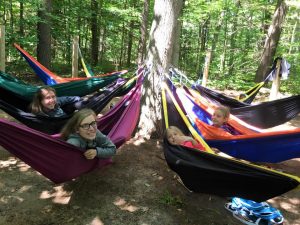 Activities abound, but it’s the relationships that remembered.

Among last year’s successes was “Bridge Builders,” which is gaining national recognition as a cutting-edge program. Geared for youth grades 9-12, “Bridge Builders” seeks to help participants “grow as a leader, develop peer ministry skills, and join the fight against racism as an expression of their faith and our call to love our neighbors.”

Clark shared that the week-long program was intense, but participants left with a new or renewed sense of purpose and empowerment.

“There were definitely some challenge points,” he said. “Probably the biggest challenge was bringing together kids from different cultures and cultural norms. We needed to recognize and acknowledge each other’s survival or preservation modes and keep grace front-and-center – but the kids navigated through the week just fine.”

Joining their Michigan peers were youth from Washington, Texas, Pennsylvania, and other states. Scholarships are available to assist out-of-state participants with registration and travel costs.

One young woman, Leticia, commented: “… I was very impressed with my small group discussing the experience they had relating to privilege and racism. I did not know that they would be as upset as I was with society nowadays.”

“The dynamic was awesome,” Clark said. “[The kids] wanted to be there.”

Grant-based follow-up will keep track of how the young people are implementing their learning and experience at home.

Another fast-growing program is “Day Camp.” In this scenario, LWM brings “the spirit of church camp” to you and your congregation. Day camp has seen steady growth in recent years as congregations seek to “springboard” their kids into the camp experience and to reach out into their communities. 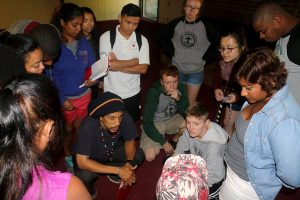 Listening, learning, and awareness are part of these young people’s desire to “build bridges.”

Geared for kids ages 5-12, day camp’s purpose is to “provide a safe environment for families to engage the gospel daily in ways that are fun, educational, and transformative.”

Mornings include devotions, several activities, and a mid-morning snack. After lunch are large group games or other special activities, and closing devotions. Devotions are story and music centered, setting the pace for and winding up the day.

Although there is a “proposed schedule,” it isn’t set in stone.

“We work with each congregation to tweak the program for their needs and desired outcome,” Clark said. “What works in one setting isn’t necessarily the best format for another.”

Because of the growing demand for day camp, LWM has had to find ways to meet that need.

Clark credits the staff for their genuineness and hard work in making the summer a success. Programs and situations involving campers with what is called “other normal” were a challenge.

“They had to learn to recognize that not everyone defines or experiences ‘normal’ the same way,” he said. “We’ll keep working on our “mental first aid” – recognizing that certain behaviors that we see as not normal might be normal for someone else.”

At the end of the day, though, the staff brought it home.

“They see what is happening,” Clark said. “They see change in the world and they believe in making a difference, in tearing down boundaries. We’re building on that for the upcoming summer.”

“Bridge Builders” and day camp are two of the myriad of innovative programs offered by LWM. There are horses to ride, rope challenges to tackle, mission trips to pursue, confirmation learnings to build on, and much more.

“One of our core values is “excellence,” Clark said in summary. “Things can only get better!”