The value of a penny

JACKSON – Water. For most Americans it’s a take-for-granted commodity. We drink it, cook with it, brew coffee and tea in it. We use it for bathing, recreation, brushing our teeth, irrigation, laundry, washing our dishes and our cars, running through sprinklers on hot summer days, dousing fires, ice cubes to cool our drinks…

We assume there is an endless supply.

We assume that those responsible for our water will keep it safe, clean, and accessible.

The water crisis in Flint and the on-going drought in California have brought some of us to a rude awakening: Water – especially clean, safe water – is not a given. It is a luxury.

But for many people of the world, clean water is more than a luxury. It is something that is desired and seemingly unattainable. 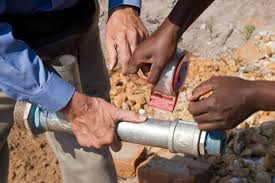 The wells are self-help projects. MMM provides the pipe, pump, concrete, and some trained labor. The villagers make the brick and supply much of the labor.

In 2014, Stan Fracker, a member of Immanuel Lutheran Church, Jackson, was spurred by a sermon given by his pastor, David Eidson, to make a difference in areas of Africa suffering the effects of unclean water.

In his sermon, Eidson referred to the Marion Medical Mission’s (MMM) Shallow Wells program (www.mmmwater.org/). The program was initiated by missionary Jim McGill of the Synod of Livingstonia, Church of Central Africa Presbyterian, who approached MMM with his idea about how to bring clean water to areas such as Malawi, Zambia, and Tanzania, where most people rely on surface water collected from ponds. Using this water has resulted in continuous cycles of water-borne diseases.

Fracker, a retired math teacher, did his research and found that the cost of installing a shallow well is $400. He quickly did his arithmetic and decided that his proposal to the congregation’s Social Ministry Committee was attainable – 25 wells at $400 per well. That would mean raising $10,000 – or 1,000,000 pennies. 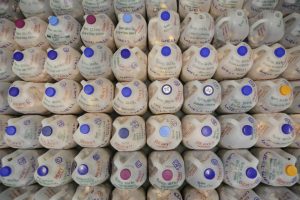 The committee latched on to the idea, which was approved by the Church Council.

The drive, named “Pennies for Wells”, was slated to begin on Sept. 7. Pennies were collected in one-gallon milk jugs. Fracker had calculated that each jug would hold 250 pennies.

The fundraiser took off with a bang and other entities in the community and beyond jumped on board. The one million mark was reached on May 21 of the following year.

“It was a wonderful experience for our congregation,” Fracker said, “as this project touched many, many groups in the Jackson area as well as nationally.

“We had folks from all over the country sending either a single penny to represent their state or other contributions. Other ELCA and non-Lutheran churches in the area also participated, as well as some senior retirement centers and a group we call ‘The Jackson Crossing Walkers’.”

Piggy-backing on the success of the fundraiser, the congregation chose to continue the project. By November of last year, the total was 1,298,061 pennies. That’s enough for 32 shallow wells. 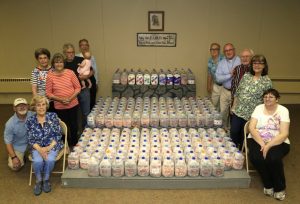 The congregation still collects pennies, although on a much-reduced basis.

“We are continuing to collect one weekend a month and have already collected nearly $400,” Fracker said, “which would fund another well.”

The people of Immanuel are grateful that their efforts, goaded by the Spirit, have brought clean water – and, above all, hope – to the recipients of the wells. They also hope to inspire other congregations to dream what is seemingly unreachable.

“We just want to show ‘the power of the penny’ and the impact it can have,” Fracker said. “We figured that if one group could fund 25 wells, then maybe, this year, we could get 25 churches or groups to fund one well each.

“We are blessed over and over again as we step out in faith to do the impossible. God meets us and helps us accomplish things that have never been done before.” 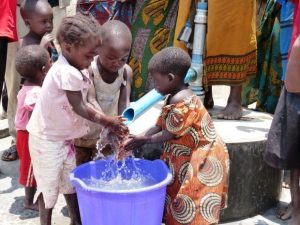 The power of the penny.

The power of God’s people.

The power of God!

You can view a 15-minute video of Immanuel’s celebration and display of one million pennies by googling Million Pennies – Stan Fracker. You can contact Stan Fracker for more information through the church: 517-782-6081 or immanueljacksonelca@gmail.com.