GRAND RAPIDS – The 2016 Synod Assembly gathered under the banner “For the Life of the World” in Grand Rapids, May 15-17. The focus was global justice. 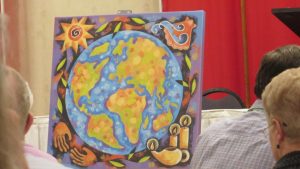 Monday evening’s Prayer Around the Cross for the Healing of the nations stirred spirits and raw emotion.

The assembly opened with songs of praise lead by a youth band headed by Pastor Aaron Werner (St. Luke’s Grand Rapids) and a welcome video from the Honorable Debbie Stabenow, U.S. Senator for Michigan. Stabenow shared her appreciation for growing up in a church (United Methodist) committed to serving others, and thanked the ELCA for that same dedication.

Monday afternoon, voting members and guests could attend one of three tracks that reflected the theme of justice for all, from our next door neighbors to those across the globe. 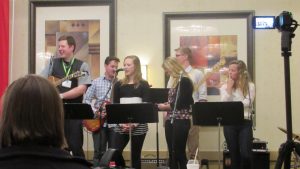 Pastor Aaron Werner, left, and a youth band lead the assembly in praise at the opening of the assembly.

Track 1, Prayer That Leads Us to Seek Justice in the World, was a “spiritual retreat within the assembly”. Guided prayer and long periods of meditative silence goaded participants to share Christ’s love and life in the world through acts of justice and mercy.

Track 2, Equipping Our Congregations for the Life of the World, was a set of seven “affinity groups” in which participants engaged in facilitated conversation on topics to strengthen their congregations’ capacity to be a church for the life of the world. Topics included global engagement, food and water scarcity (including the Flint water crisis), helping our children confront and respond to racism, and the global refugee crisis.

Track 3, Meeting Christ in the World, was a hands-on opportunity to encounter Christ through service in the Grand Rapids community.

The volunteer choir was a welcome addition to assembly worship.

The Rev. Daniel Rift, Director of the ELCA Hunger Appeal, brought the ELCA report to the assembly. The report included an opportunity to “vision” the ELCA’s future.

Highlights included a special acknowledgement, a service of prayer, and a baptism.

On Monday evening, the assembly rose to its feet in applause as it acknowledged the 70th anniversary of ordination for Pastor Ray Bartels, retired (member of Peace, South Haven). Bartels shared a brief story of how his ministry didn’t end when he retired – and he’s still going strong.

Monday ended with the Prayer Around the Cross for the Healing of the Nations. It was an emotional, spiritually-moving service, calling for wholeness in a broken world. 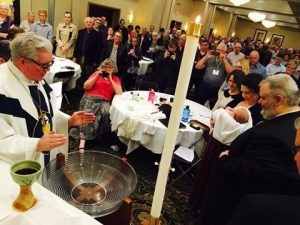 The baptism of James Justin Walker was a cause for celebration at closing worship.

Closing worship on Tuesday included the baptism of James Justin Walker, infant son of Pastor Jessica Rivera-Walker (Edgewood, Fruitport) and Pastor Justin Walker (Peace, Holland), by Bishop Craig Satterlee. The baptism was extra poignant because the Walkers had a difficult pregnancy – so there was much celebration and praise!