SAGINAW – Many churches across our synod have after-school or summer programs for children and youth, ranging from music, tutoring, recreation, and child care to art, learning, hands-on activities, crafts – and more. 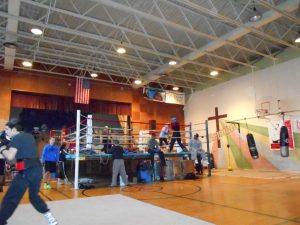 Having a permanent home gives the club consistency and roots.

But one congregation is probably unique in offering boxing.

Zion Lutheran Church, Saginaw, plays host to The Saginaw Boxing Club, a year-round program that promotes discipline and hard work, while aiming for participants to not only learn the craftsmanship of boxing, but to gain a sense of pride and self-worth. The club’s mission is to be “a nonprofit organization that offers physical and mental training to youth and adults of Saginaw free of charge in the art of boxing and self-discipline”.

With a large gymnasium that saw less and less use over the years and with a commitment to its changing neighborhood, Zion took on the opportunity to be the club’s home. This has given the club consistency and roots. It has given Zion a tangible way to demonstrate its commitment to the neighborhood.

Kids and young adults participating in the program find Zion to be a safe, welcoming place where they can feel part of a community. Some young people find boxing to be a way to unleash their emotions in a controlled environment. Some box because they like to do sports and this is one sport that they can afford or one for which they’re skilled.

Most of the boxers are male, most are Latino – but there are females and there are African Americans and a few others in the mix. Many are in low-income situations and some are at-risk. 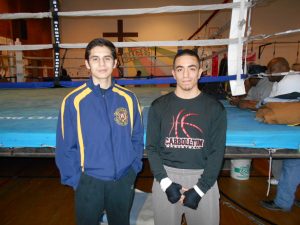 Jeremy Olivarez (left) with Joe Mendez: “It’s a great way to take out my anger and frustrations.”

But in the confines of Zion’s gymnasium, they are a community of individuals aiming for being the best they be.

“These kids are amazing,” said Pastor Sue Hand, Zion. “Some of them have tough challenges in life… but they try to find positive ways to deal with it.”

“At first I thought it would be a little ‘phase’ thing,” Mendez’s father said. “But after I watched a couple of fights, I knew he was serious. I’m really proud of him.”

Mendez, who has run track, played basketball and football, and who works out to stay in shape, knew he was in the right place when he stepped into the ring for his first fight.

“I wasn’t really nervous,” he said. “When I stepped into the ring I thought ‘just lean back into what you’ve learned, Joe’ – and it worked.”

Mendez believes that he has a good jab and good timing. He continues to hone those strengths, while working on what he sees as a challenge: his head movement. But Mendez has no doubt that he’ll improve.

Jeremy Olivarez, 19, has been boxing for five years. He was inspired to try the sport after witnessing an older cousin’s success with tae kwon do.

“He learned discipline and proved he could be tough,” Olivarez said. “Not ‘tough’ like beating somebody up… but being able to hold his own.”

Olivarez, who works full time, spends his evenings working out at the boxing club and his weekends participating in tournaments. He credits boxing for keeping him disciplined and focused.

“I’m either working or boxing,” Olivarez said. “I don’t have time to get in trouble. We can’t drink; we can’t smoke. We need to be healthy – our bodies and our minds.”

Olivarez knows he could have easily made choices that took him down a different path.

Even harder has been the loss of his mother who was murdered in her home last fall. (His father’s incarceration has no relation to his mother’s death.)

“A family… well… sometimes in life you can’t control things,” Olivarez said. “It’s [boxing] a great way to take out my anger and frustrations. I definitely need this.”

He hopes to go professional. 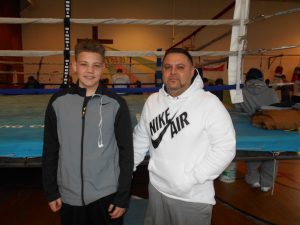 Jayden Rodriguez (left) with his father: “I just focused and remembered what I’d learned.”

Jayden Rodriguez, 14, began boxing almost two years ago and has rapidly made his way to championship status.

Rodriguez had his doubts when he entered the ring for his first bout.

“I was anxious and wanted to get it over with,” he said. “But I just focused and remembered what I’d learned – and I won.”

That win gave Rodriguez the boost he needed to continue.

“I like it,” said Rodriguez’s father. “It keeps Jayden busy. When he gets home he’s worn out and he doesn’t have time to run the streets. And he know that if he gets in trouble, his punishment is ‘no training’.”

Like Olivarez, Rodriguez hopes to be a professional boxer. 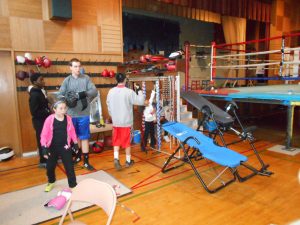 The boxers learn self-confidence and responsibility.

“I’ll have to train harder,” said the young boxer, who runs, shadowboxes, and practices his footwork to stay in shape. “But it’ll be worth it.”

“These three young men are awesome,” Hand said. “It’s been amazing watching the transformation – especially Jeremy. This program and his girlfriend are the two steadying things in his life.

The $100 per month lease agreement between Zion and the Boxing Club addresses expectations about the building. The fee is waived if grant money is available. The church charges a rental fee for and provides concessions for on-site tournaments. Currently, Zion is negotiating with the Juvenile Court as to the possibility of including youth on probation in the program.