PORTAGE – Pastor Joan Herbon brings new meaning to the words “Lutheran DOGma”. Herbon, who serves Lord of Life Lutheran Church, Portage, has been a “foster ma” to 42 dogs – and she has no doubt that God has used this foster mom/dog relationship to lead her to where she is today. 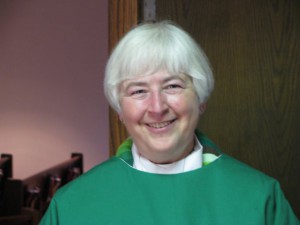 Pastor Joan Hebron has fostered 42 dogs, with Kayci and Meryl the most recent.

Her reasoning for not wanting to be a pastor was that she was extremely shy.

God had other plans.

It began with Herbon owning and training Irish Setters. She entered the dogs in shows and took them with her to work and other places.

Herbon then got connected with Leader Dogs for the Blind and fostered a Golden Retriever named Jenny. She found that she enjoyed – and was good at – training Jenny the initial layer of commands and behavior required of an assistance dog.

“Jenny was a good dog,” Herbon said. “It was hard giving her up, but I knew she’d be appreciated by her new owner. She went to Spain.”

Herbon was prepared to foster another guide dog when she and her husband moved out of state for his work. There she connected with Guide Dogs for the Blind and with the 4-H. Although not yet apparent, it was Hebron’s simultaneous work in these venues that cemented her path toward ordained ministry.

Working with the dogs and with 4-H not only honed Herbon’s patient and loving persistence, but showed her that she could be a tool for bringing hope into people’s lives.

“I was becoming skilled in many things,” she said. “How do you comfort kids when they lose a pet or a prize animal and help parents deal their children’s grief? How do you explain what seems unfair?

“I was learning how to participate in community – in this case, a club – and make it make it a place of wholeness. God was actually teaching me how to minister to a church.”

Another move connected Herbon with Paws with a Cause – an organization that has become near and dear to her heart.

One of Herbon’s most poignant stories involves a young man named Keith and an assistance dog named Elvis.

Keith, who resided in Cleveland, suffered multiple disabilities. Junior diabetes had left him sightless, with an artificial eye, and with the need for a kidney transplant. Elvis, who was fostered by Herbon, became Keith’s assistance dog.

Keith and Herbon kept in contact through letters and through videos depicting Elvis at work. Keith, who was Jewish, made a faith connection with Elvis that he shared with Herbon. One of her favorites is: “I’m so happy to get a dog who understands liturgy!”

Then Keith was diagnosed with Hodgins disease. It wasn’t long before his parents, who live in Niagara Falls, called Hebron.

“They said that Keith’s chemo treatments led to the rejection of the kidney transplant,” she said, “and that his dialysis was ineffective.”

“Elvis changed my life,” Keith told his parents. “I want to send him back to be trained for someone else.”

Paws for a Cause was aware of the very strong bond between Keith and Elvis and presented Keith’s parents with an unexpected gift.

“Keep the dog for as long as you need him,” said the organization.

Herbon and Keith’s parents kept in touch… then Herbon received an unexpected visit. 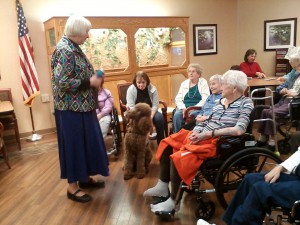 Kayci waits for a toy that Joan is holding. Assistance dogs must be patient and not distracted.

“They called one day and said ‘we’re close by and we’d love to stop by to see you’,” Hebron said. “When I asked where they were they said ‘Omaha.’ I lived in Denver. Isn’t that amazing?”

It’s over 500 miles between the two cities.

“We did a lot of laughing and crying,” Hebron said.

Herbon moved back to Michigan where she found a new church home. The tug toward ordained ministry became more pronounced. She was at a synod assembly when she realized God was serious.

“Everything said ‘seminary, seminary, seminary’,” she said. “The first hymn at opening worship was ‘Listen, God Is Calling’, Trinity [Lutheran Seminary] was on hand– and things just continued from there.”

Herbon learned that the seminary has tracts for second career students. Because she was over 40, life-experience was on her side. She was able to earn a degree from Wayne State University (Detroit) in two years, rather than the typical four, then head to Trinity. She continued training assistance dog

But even though the dogs played a big role in Herbon’s path to the ministry, she showers her thanks upon a higher power.

“God new I was shy and that it was holding me back,” she said. “He brought these dogs to me for a purpose.”

*Elvis went to another young man and, in line with protocol, was renamed. His new name was ‘Scott’. But when his new owner heard Keith’s story and how close Keith and his dog were, ‘Scott’ once again became ‘Elvis’.

Part two of this article focus on how the dogs impact Hebron’s ministry, especially through their visits to a local nursing home.