Bringing others to Jesus, part 3

SYNOD – Part 1 looked at Living Water Ministries’ successful 2015 summer season. In part 2, summer camp staff member Molly Smith spoke about her role as the day camp director and as a worker at the National Youth Gathering in Detroit. Now, Executive Director C. J. Clark gives his take on LWM and its future.

Building on the success of the 2015 summer camp season, Living Water Ministries Executive Director C. J. Clark is confident going into the future. Added to the mix are LWM’s Program Innovator Nicole McCarthy and aspects of LWM’s programming that have taken root. 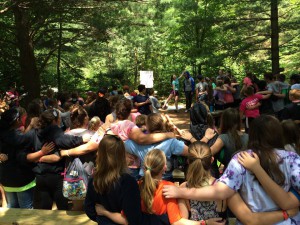 “One of our greatest gifts is relationships.” -Clark

A strength that Clark sees buoying LWM’s work is being a place where people of all ages and all walks of life can find acceptance and unconditional love – whether it be summer camp for kids, a mission road trip, or a weekend retreat for adults.

“One of our greatest gifts is relationships,” Clark said. “I like to call camp the ‘real’ world, where one experiences the care and love of Jesus. Then we send campers into ‘the’ world, a place that is very broken and needs Jesus, equipped to cope and to reach others.”

“The Gathering is probably our best way of hitting all points of our mission,” Clark said. “There’s Christian community; there are opportunities for growing in faith and leadership skills, and serving others. It’s a great event.”

Summer day camp, another strength, has become increasingly popular. LWM reached 545 kids at day camps held throughout the Lower Peninsula in 2015. Two or three day camps ran simultaneously each week and this year a day camp was intentionally held in a Detroit Hispanic community.

“We hope to reach out to the Hispanic community by letting them know we are open to and welcome Spanish-speaking campers,” Clark said.

Ground has been laid not only via the intentional day camp in Detroit, but by having Spanish-speaking summer staff members. Now, for several summers, the staff has included to young people from Mexico. There has also been inclusion of staff from two of our synod’s companion synods, Papua New Guinea and Latvia.*

“The international staff add a layer of culture to the camp experience,” Clark said. “Having staff from our companion synods helps them and us to put ‘meat on our bones’ with our relationship. We gain perspective on each other’s culture and faith.

“The same [is true] for the Mexican staff and what it could mean [for future outreach].”

Looking ahead, Clark knows that LWM must branch out in some new directions, while retaining and building on its strengths. Today’s world sees organizations such as LWM going beyond “camping” and “outdoor” ministry. 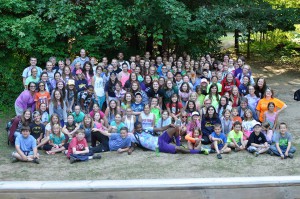 “I think we know very clearly who and what we’re about,” he said, “and the words ‘outdoor ministries’ really don’t describe the scope of what we do.

Clark has been reaching out and talking with other executive directors to find what directions they see ‘outdoor ministries’ going. He has found that, for the most part, his peers are on the same page.

Among the ideas are:

Clark explained that some would-be campers often don’t realize they can register as individuals or feel like a “tag-on” if they are added to a group.

“There’s sometimes the misconception that you have to be with a group to sign up for Living Water’s programs or that kids can’t come to camp unless they’re with a group and an adult leader,” he said. “Actually, the only program where we expect an adult leader is confirmation camp. We want folks to know – especially children and high schoolers – that they can come on their own.”

Even though there are bound to be some changes in the “how, who, what, and where”, LWM’s “why” remains constant.

“If we are to be most faithful to our mission, we will continue to work at filling Stony Lake Camp or other sites with people willing to hear, wanting to hear about Jesus,” Clark said. “It’s who we are. If we don’t have that, we’ve blown it.”

*The photos of individuals are international staff, summer camp 2015.